The Basilica of “Saint Michael’s in the Forum” 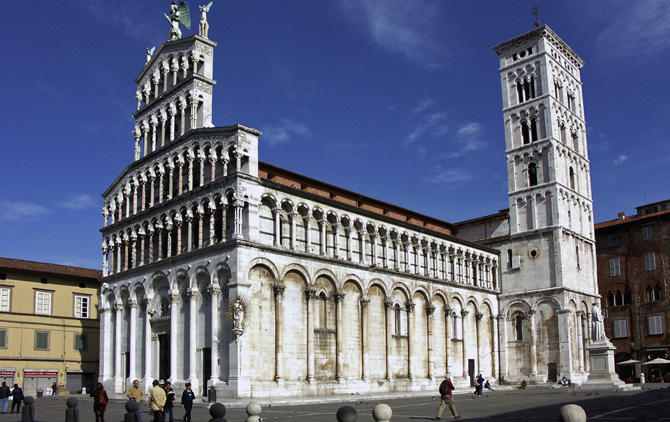 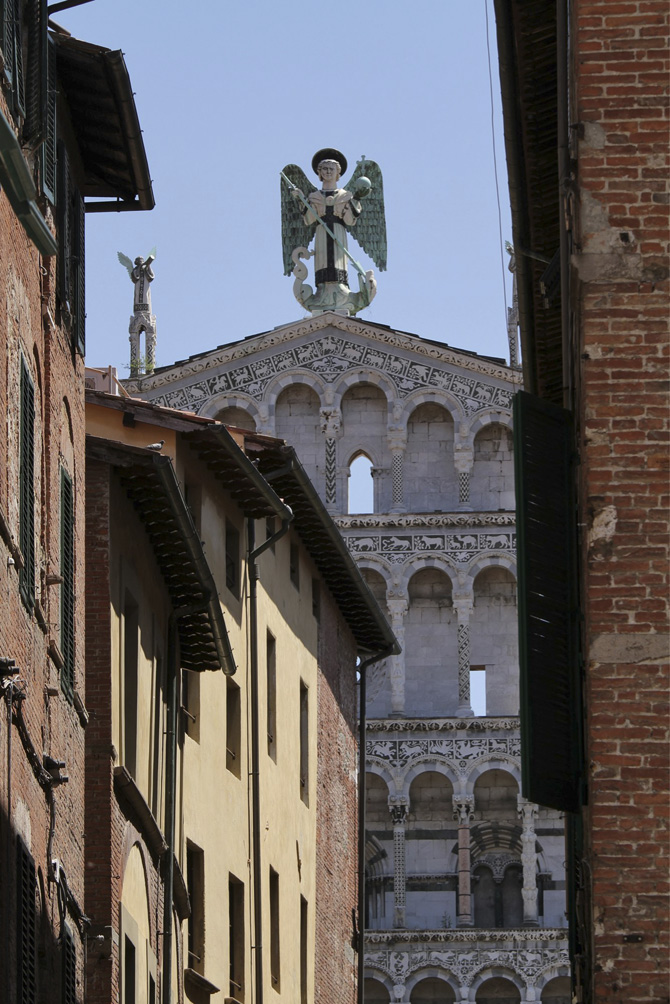 Apart from the old amphitheatre another area where the townsfolk liked to meet is the square in front of the church of San Michele, the site of the Roman Forum. Piazza San Michele is dominated by the church which was begun in 1070 on the orders of Pope Alexander II, replacing an older structure that dated back to the eighth century AD.

The Basilica is shaped like a Latin cross and has three naves, a transept and a large semicircular apse.  It has an elaborate facade with four orders of loggias decorated with relief sculpture and inlays.  On the summit of the facade stands a statue of the Archangel Michael, who wears a decorated tunic and the cloak of a Byzantine general. The commander of the celestial army strikes the dragon beneath him with his spear while holding a orb adorned with a cross, a symbol of Christian authority used during the mediaeval period. His gaze is directed at the people below. 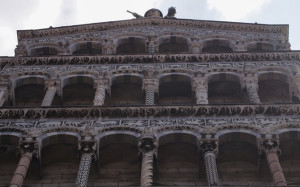 St Michael is flanked by two angels with trumpets who are also dressed as patricians. According to Christian tradition the angels sound the trumpets to proclaim the beginning of the Last Judgement when Archangel Michael will lead his warriors into the final battle against the forces of evil.

In the south-western corner of the church there is a gothic sculpture of the Madonna with Child (Salutis Portus), an 1480 work by the sculptor Matteo Civitali which celebrates the end of the plague of 1476.  The bell tower was erected in the southeastern corner between the 12th and 14th centuries. This too is decorated with double and triple blind arches. According to local legend the tower was so high that the bells could be heard from far away.  So far away in fact that Giovanni dell Angello, the city magistrate of Pisa, Lucca’s eternal rival, ordered that the highest level of the tower be demolished so that the bells could no longer be heard in Pisa. 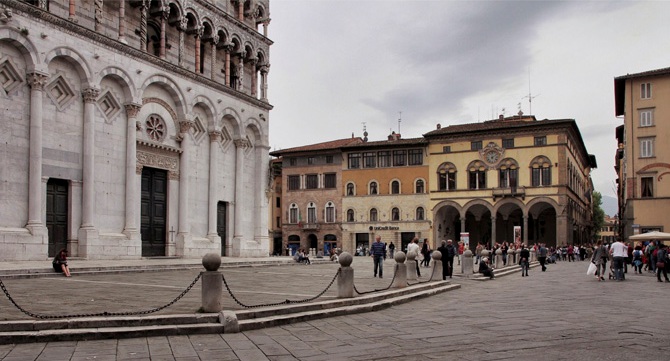 The interior of the church is a classic example of Romanesque architecture with a vaulted ceiling and lunettes. In the apse there is a splendid painted cross, a fine example of “Christ in Triumph” iconography so typical of the Luccan-Pisan school of the 12th century.

Another famous similar cross is housed in the collection of the National Museum of Lucca in Villa Guigni. The church also possesses a masterpiece of religious painting. This is the Pala Magrini  by Filippino Lippi  which dates to 1483. It  depicts Saint Roch, Saint Sebastian,  Saint Girolamo and St Helena, the Empress, mother of Constantine. 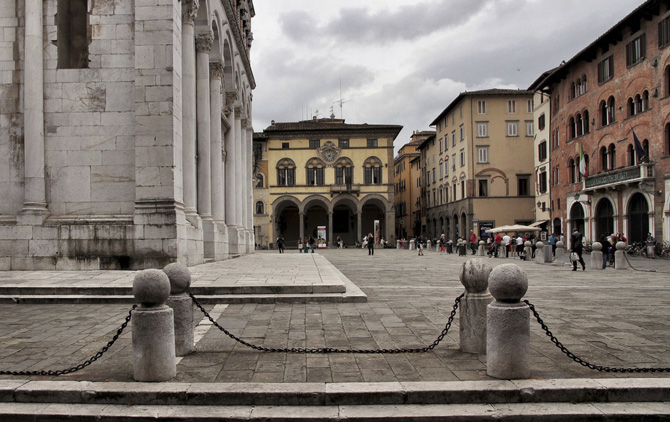 Public buildings such as the Palatium Civitatis, the town hall, were built in the square along with many private houses. However these no longer exists but the Renaissance Palazzo della Podesta, the magistrates palace, now known as Palazzo Pretorio was built on their ruins in the 15th century. A monument honouring Matteo Civitali  was placed under the loggia.  Nowadays the area under its vaults are used for public events and Food & Drink exhibitions. The façade of the Palace is decorated with a beautiful clock.  A statue of Francesco Burlamacchi (1498-1548), an important political figure of the Republic, by Ulisse Cambi, stands in the centre of the square.