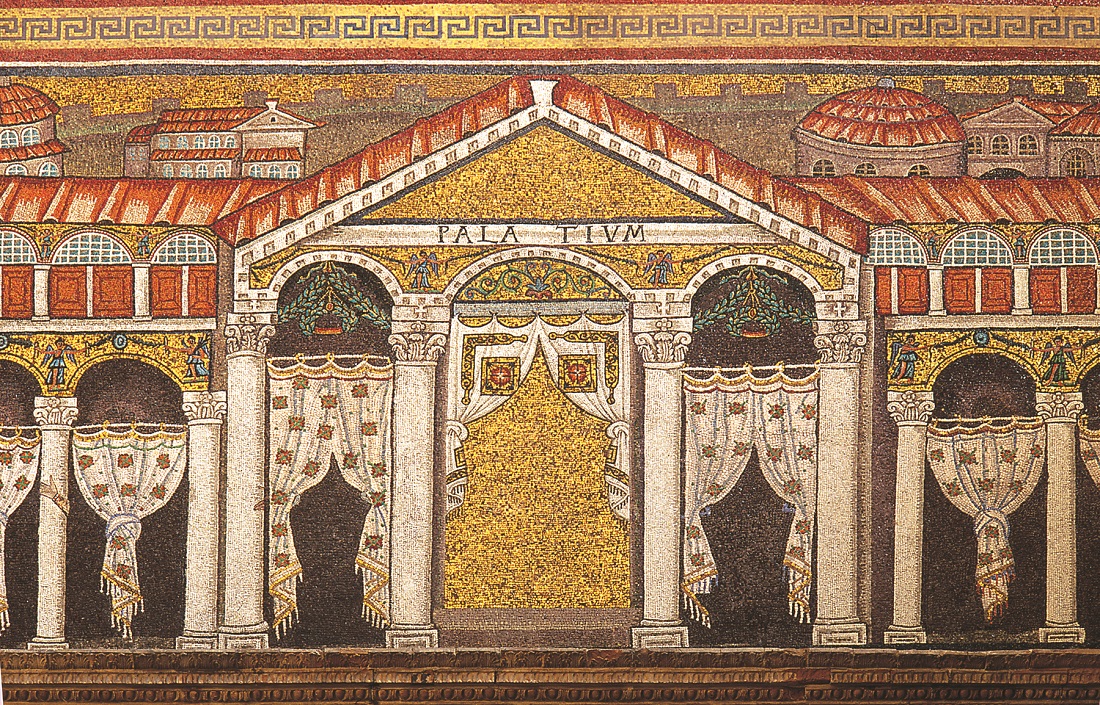 The Ostrogoth King, Theodoric the Great was born in 454. In his youth he was held hostage and educated at the Imperial Court of Constantinople. Later he took control of the Kingdom of Italy  and ruled from 493 to 526,  making his capital in Ravenna where he built the splendid Basilica of Christ the Saviour. Theodoric was an Arian Christian, (an early faction  that did not believe in the Catholic Trinity but saw Christ as subordinate to God) and the Basilica  is an undisputed masterpiece of  Byzantine art. Its name has been changed twice over time. In 561 the Orthodox Byzantine Emperor Justinian, whose general Belisarius had recently reconquered Ravenna, rededicated the church to St Martin of Tours, a vigorous foe of the Arian faction, while in 856 the church was once again renamed as Sant Apollinare Nuovo, probably due to the fact that the relics of St Apollinaris, the first Archbishop of Ravenna, were transferred from the nearby Church of Sant Apollinare in Classe on the Adriatic coast. The “Nuovo” was added to the name in order to distinguish it from another older church dedicated to St Apollinaris, Sant Apollinare “in veclo” which  has come down to us today in a restored17th century baroque style.

The austere façade of the Basilica resembles those of Milanese churches of that period. The original narthex was substituted with a refined portico in the 16th century. An elegant cylindrical bell tower  with numerous simple and mullioned windows was erected near to the south wall in the 10th century.  The church has three naves, a central main nave and the two narrow side aisles with lower ceilings. The northern and southern walls have a number of large windows which add light to the overall architectonic splendour of the building. On entering the church the influence of  Byzantine art immediately strikes the visitor. 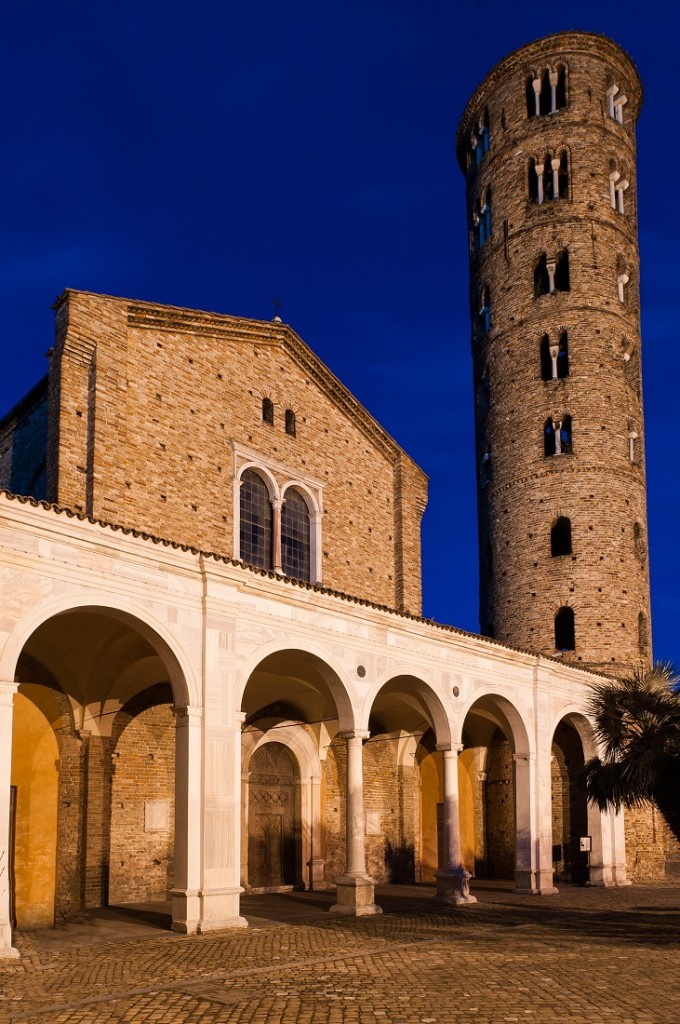 The central nave is separated from the side ailses by two rows of large archways. The interior is flooded with light entering from the high windows and with the flowing shape of the arches, the marble columns and the golden mosaics decorating the walls the building almost appears to be in movement.

The third and highest level of mosaics describes events from the life of Christ. The left wall displays scenes of miracles, while the right wall depicts the Passion, (excluding the flagellation and crucifixion). For the first time in Christian art, episodes from the Gospels are represented in the order that they have in the liturgical services. It is also significant that in the depictions of the miracles on the left we see a young breadless Christ whereas in the compositions of the passion we see the Saviour represented as an older bearded man. In all of the compositions the figure of Christ is always larger than other figures and we can see that the stylistic formulas for depicting the life of Christ were still undergoing development. The colours of the mosaics are concentrated and intense and remove the mind of the viewer from everyday reality, transporting us to the holy Jerusalem where “the street of the city was pure gold, as it were transparent glass”. Revelation: 21,21. 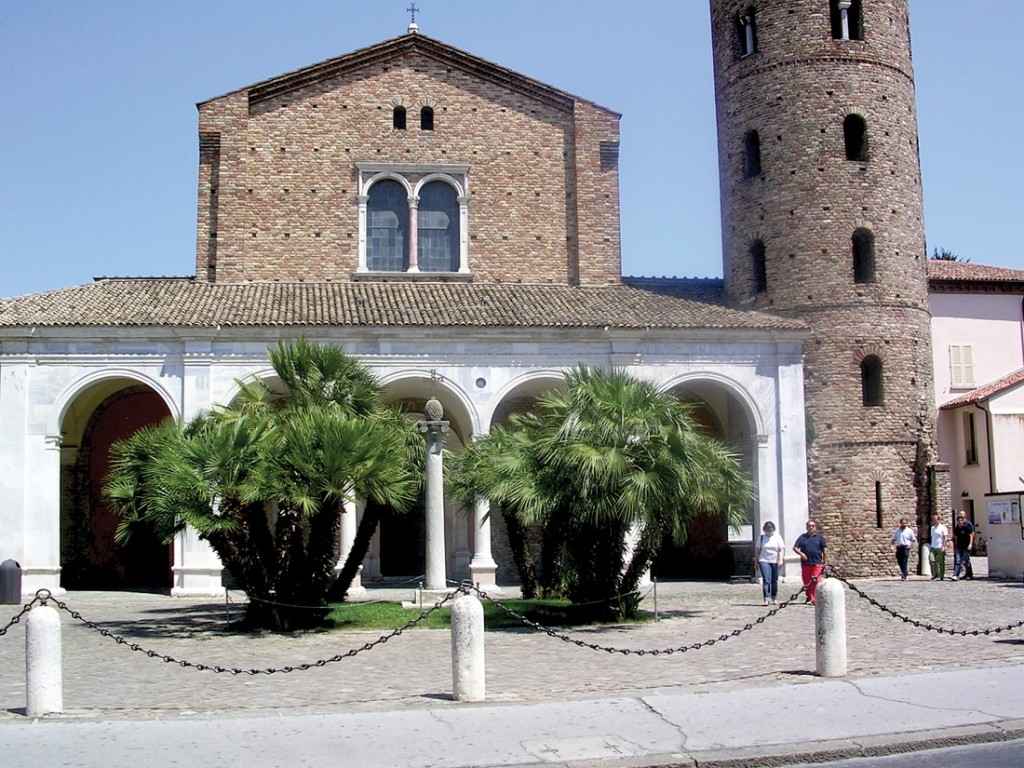 The central section of the mosaics depicts apostles and prophets, the witnesses of the existence of paradise. Pure light is symbolically represented by the golden background and by the rays of light entering from the windows. Their very essence fluctuates in adoration in front of the celestial throne and here there are no shadows. The other inhabitants of the celestial kingdom are doves, peacocks and pheasants.

The virgins and martyrs who walk towards the throne of the Queen and King of Heaven are without doubt the most important part of the mosaics. The mother of God and the Saviour accept the adoration of the faithful in the temple, and relics of the Masters and Saints are placed directly below their portraits in the mosaics. The choice of those to be represented was based on their presence in the prayers that were offered in memory of the dead. Obedience of the Earthly King to the Heavenly King was shown by the portraits of Theodoric and his wife at the front of the two lines. 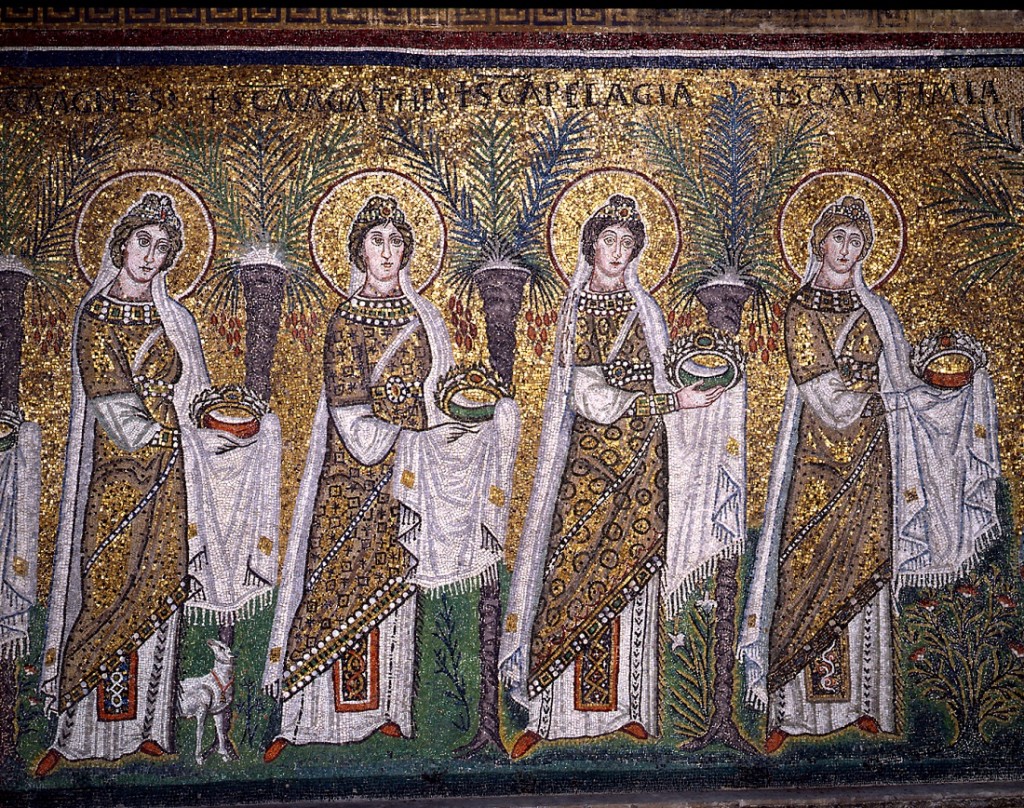 However,  the orthodox  Byzantines  substituted the images of the King and his wife with depictions of St Martin, who would give his name to the Basilica, and the three Magi taking their gifts to Jesus and his mother  who are seen  enthroned. The Virgin is dressed in a purple robe seated on the throne with her child who wears a pure white tunic, accompanied by four angels who are also wearing white robes “And his raiment became shining, exceeding white as snow; so as no fuller on earth can white them” Mark 9:3.

On the opposite wall we see Christ enthroned, wearing a purple robe with a golden sash like an emperor, holding in his left hand as a symbol of the axis of the world and divine love which unites all living creatures.

The faces of all of the figures have the same archetype following the theology of the sixth century Dionisio Areopagita “ those that accept the same food (Eucharist) must have the same expression”. The row of images closes with views of the palace of Theodoric and the city of Classe.   It is also possible to see where the figures of members of Theodoric’s court have been removed from the original mosaics, with only their hands appearing on the white columns.