The final element of the architectural complex of Piazza dei Miracoli is the monumental cemetery called Camposanto – literally “the holy field”. Its name derives from the fact that at the time of the second Crusade, archbishop Ubaldo brought a shipload of earth from the hill of Golgotha in Jerusalem and had laid it in the area now occupied by the cemetery. Building began in 1277 and the name Campo Santo is mentioned in documents from 1287 onwards, and before 1406 it was never used anywhere but in Pisa. (Afterwards the name was used for cemeteries in other Italian towns)

The cemetery is located to the north of the cathedral. It is a splendid building, the work of the architect Giovanni di Simone. It consists of a rectangular cloister rather like the courtyard of an ancient Roman house but on a larger scale. The exterior wall is made of marble and is decorated with blind arches typical of Romanesque architecture. The main entrance facing south is decorated with a Gothic tabernacle with sculptures of the Madonna and Child and four Saints. The interior walls of the cloister contain numerous windows with Gothic tracery which allow light to enter into the dark portico. The porticos contain many Roman sarcophagi which had been re-employed as the tombs for important figures of Pisan society in the Middle Ages. The eastern section has a dome, the symbol of the sky, a request for special heavenly blessing for those buried in this area of the cemetery. 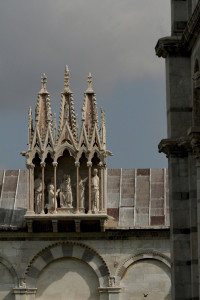 The frescoes, which were created between the 14th and 15th centuries, were badly damaged in a bombing raid in 1944. The frescos of “the creation of the world” depicted in 23 scenes by an unknown Sienese artist and Benozzo Gozzoli’s the Adoration of the Magi suffered particularly. The Last Judgement, Hell, the Thebaid and the Triumph of Death were also damaged. Fragments from these frescoes have been remounted on alabaster panels, but even in this state the frescoes provoke an unforgettable sensation. 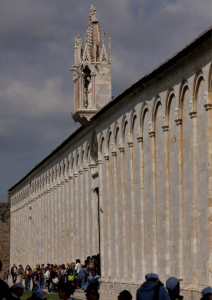 There has been some debate regarding the authorship of some of these frescoes. However the art critic L. Bellosi has attributed them to the master, Buonamico Buffalmacco (1290- after 1341). The frescoes allow us to observe the perception of the world according to the mediaeval mindset. The Thebaid was based on a popular version of the life of the Egyptian hermits by a Domenican Friar Domenico Cavalca. The sources for the Triumph of Death were popular legends that were widespread in Europe in the 10th century rather than sacred texts. The legend of the Three Dead and the Three Living is an allegory of the vanity and emptiness of life on Earth and temporal power. Contemporary literature also inspired some of the frescoes including poems by Jacopone da Todi and Dante’s Divine Comedy. 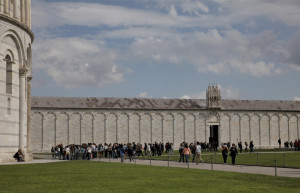 Pastimes in the Time of the Plague depicts nobles, young maidens and ladies of the court carrying out their daily pastimes however their inevitable destiny is shown with the image of death holding his sickle. This image was used for the very first time here in the frescoes of the Camposante. Here the iconographic principle is not that of the symbol (as we’ve seen in earlier Pisan painting which was influenced by Byzantine art), rather it is based on allegory and expresses human attraction for material wealth, pleasure and beauty which is contrasted with the fear of Death that spares no one, not even kings or popes. Many of the frescoes are also decorated with verses which emphasise the rapid passage of life. The naked bodies held in the arms of angels and daemons represent the souls of the dead leaving their earthly bodies.