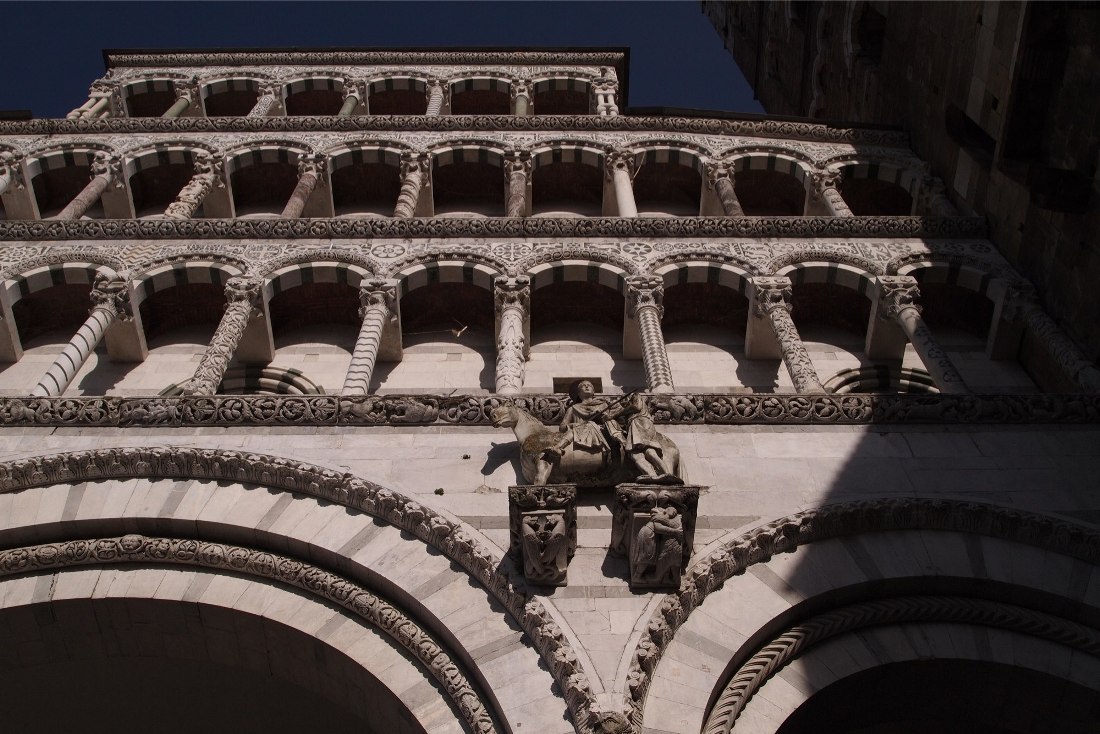 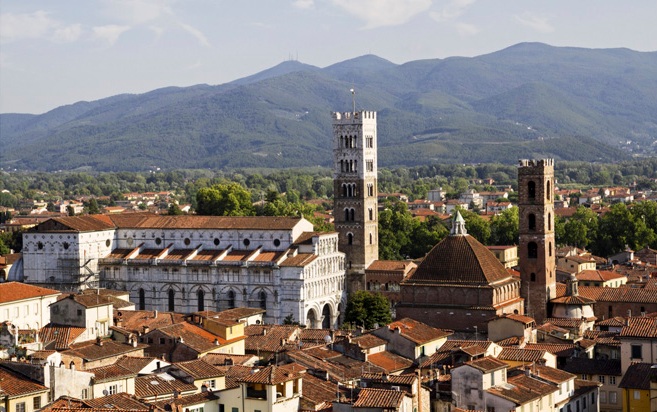 According to legend the first church dedicated to St Martin of Tour was founded by the Archbishop of Lucca, Saint Frediano, who was born in Ireland. We know St Martin was admired for his acts of charity even if he was a soldier. According to legend he cut his cloak into two in order to share it with a poor, cold traveller. During the night he had a vision in which he had shared his cloak with Christ himself. St Martin converted many pagan Celts. In the eighth century the church of St Martin became the city’s cathedral and in 1060 the construction of a new Cathedral began on the same site. This building was completed at the end of the 13th century.

There is a beautiful sculpture depicting St Martin on horseback where he cuts his cloak into two on the southern archway of the cathedral’s porch. 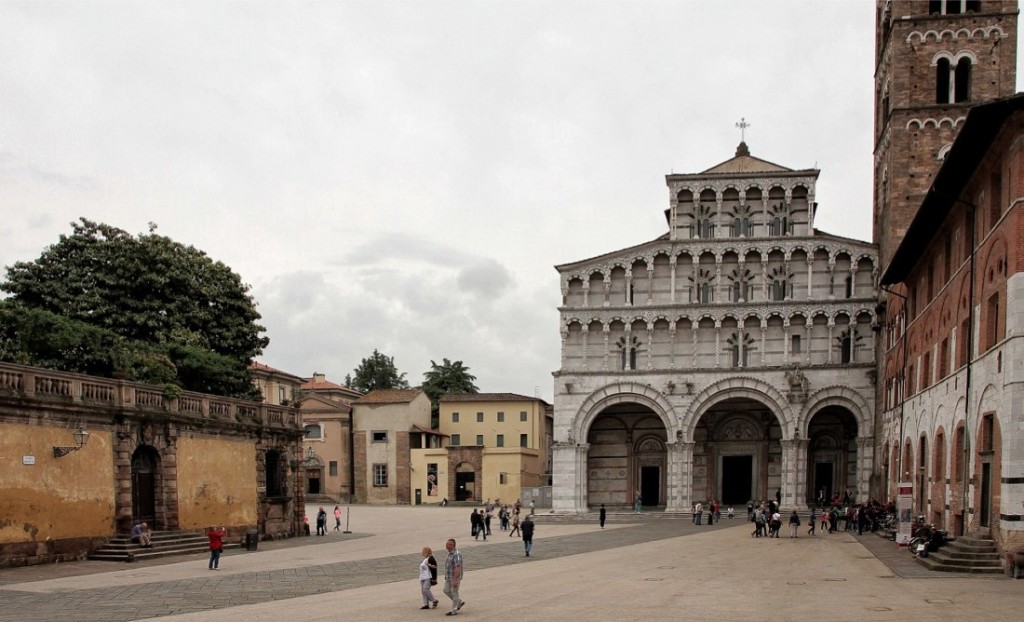 Three archways of different sizes take the visitor under the vaults of the porch. The architrave of the south door of the cathedral is decorated with relief sculptures showing scenes of the life of St Martin, while the north door shows scenes of the life and martyrdom of Saint Regolo. The central door has a beautiful composition depicting the ascension of Christ, while the south door has a Deposition of Christ by the master Nicolo Pisano, from around 1260.  This was chosen deliberately as the doorway leads to the octagonal temple situated inside the cathedral which houses the city’s most important relic: The Volto Santo (the Holy face).

According to the 11th century Deacon, Leobino Rangerio, Saint Nicodemus, who had helped Joseph of Arimethea to take Christ’s body down from the cross and place it in the Sepulchre, decided to reproduce an image of Christ. He sculptured the figure of Christ crucified but found he was unable to sculpt Christ’s face. He fell asleep and in a dream he saw his work being finished by angels and on awaking found that Christ’s face had been completed. It had open eyes, and a beard divided in two, with long hair: just as he appeared before the crucifixion. 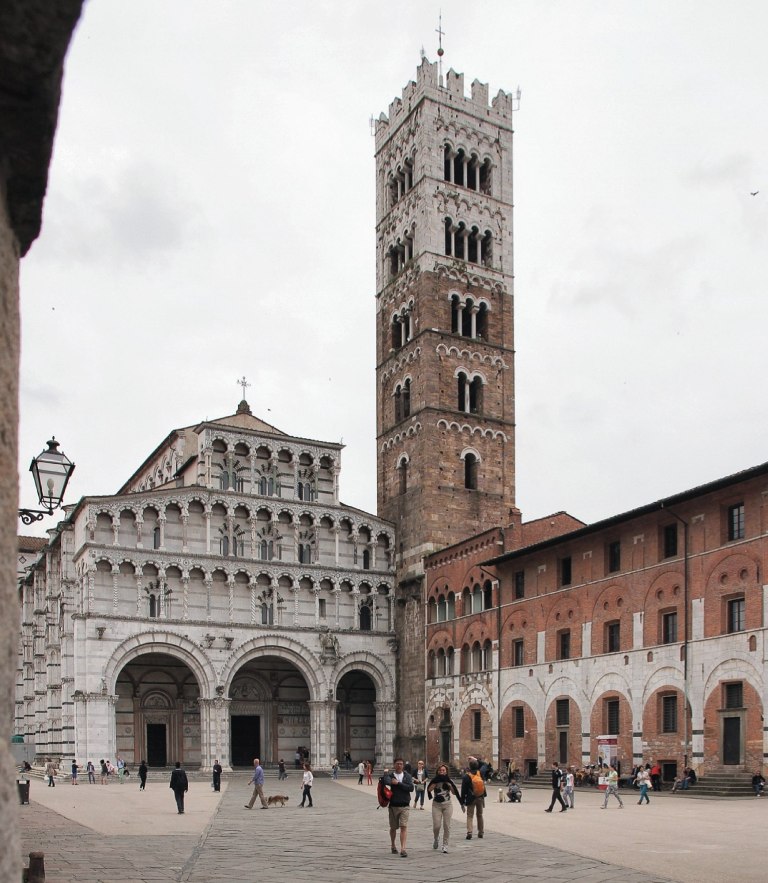 The work had been completed miraculously without human hands. On his deathbed, Nicodemus entrusted the sculpture to Issaar whose family kept it in a cave for generations. In the eighth century while Bishop Gualfredo was on a pilgrimage to the Holy Land an angel appeared to him one evening as he slept. The angel told him that the Volto Santo (the Holy Face) was hidden nearby and that he should save it. In order to protect the image from iconoclasts Gualfredo had the crucifix transported to Italy on a boat without sails that was headed for the port of Luni. Shortly afterwards the Archbishop Giovanni of Lucca also had a vision in which he was told to go to Luni in order to take possession of the Volto Santo exchanging it for another relic, a small phial of the Holy Blood. In the year 742 the Volto Santo was taken to Lucca where it quickly began to attract large numbers of pilgrims. It also became associated with a miracle: initially the crucifix had been placed in the ancient Basilica of San Frediano, however one morning it was discovered that it had been “translated” miraculously to the garden next to the cathedral on the spot now occupied by the small Temple of the Volto Santo, which was built in 1484 in the Renaissance style by the architect Matteo Civitali.

The main religious festival in Lucca became the festival of the exultation of the Holy Cross, which is celebrated on 14th September. The Cross of the Volto Santo was supposedly brought to Lucca by Empress Helena, the mother of Constantine the Great, on her return from the holy land, believing it to be the true Cross. However there is a strong possibility that the relic we see today in the cathedral is a copy made in the late 11th century since the original was consumed by the continuous touching of so many pilgrims. Every year on 3rd May, the miraculous Translation of the Volto Santo is celebrated. On both festivities the Volto Santo is shown to the citizens and a procession takes place, going from the church of San Frediano to the Cathedral.