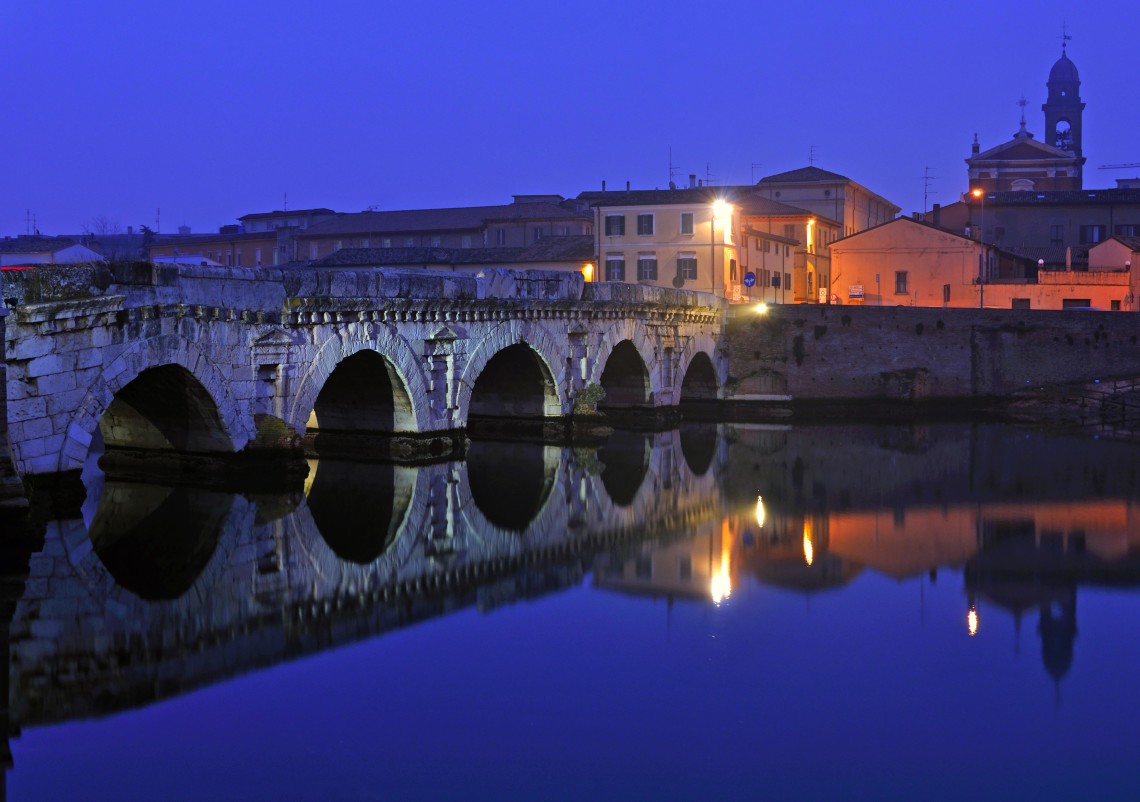 Legends claim both Hercules and Noah as the founders of this city whose life really began as a Villanovan settlement in an area that has been occupied for 3,000 years. Villanovan settlements existed in the area between the ninth and sixth centuries BC. However the earliest settlements in the area date back to the Palaeolithic era and were mainly located inland, before the inhabitants gradually moved towards the coast.
Today Rimini is the crossroads of various cultures just as it was in its earliest history meeting the Etruscans and Greeks, then the Italic peoples and Celts, until the Romans founded their city on the banks of what is know known as the Marecchia River, known at the time as the Arminus, the source of the name of the colony: Ariminum. The Roman Decumano Massimo (the main East/West road), corresponds to the modern via IV Novrembre and via Garibaldi while the Cardo Massimo, (the main north-south road) which crosses it corresponds to Corso Augusto. The forum, the pulsating heart of political and economic life of a Roman city, was located on the site of today’s Piazza Tre Martri.
The Roman colony of Ariminum was founded in 268 BC and in 90 AD it became an official “municipium” of the Roman Empire. The Bridge of Tiberius, the Arch of Augustus and the remains of houses such as Palazzo Diotallevi and those of Piazza Ferrari, all bear witness to the city’s Roman heritage.
With the spread of Christianity, the fourth century saw first building dedicated to Christian worship: the cathedral of Saint Colomba. Following the Barbarian invasions and the fall of the Western Empire in 476 A.D. Rimini enjoyed a period of prosperity which came to an end with the victory of the Byzantines in a war against the Goths in 553. In 756 following the conflict between Byzantines and the Lombards, King Pepin gave Rimini as a gift to the church. In the 12th century the city was governed by a council and then by a Podesta- a sort of Chief Magistrate. Political and economic activity took place in today’s Piazza Cavour in Arengo Palace (1204) and in the Podestà’s Palace (1330).

Religious and political struggles for the control of the jurisdiction of the territory dominated the life of the city until power was consolidated in the hands of noble families and the Malatesta in particular in 1334. During the rule of Sigismondo Pandolfo Malatesta (1429) Rimini was one of the more important cities of art and culture of the Renaissance period. 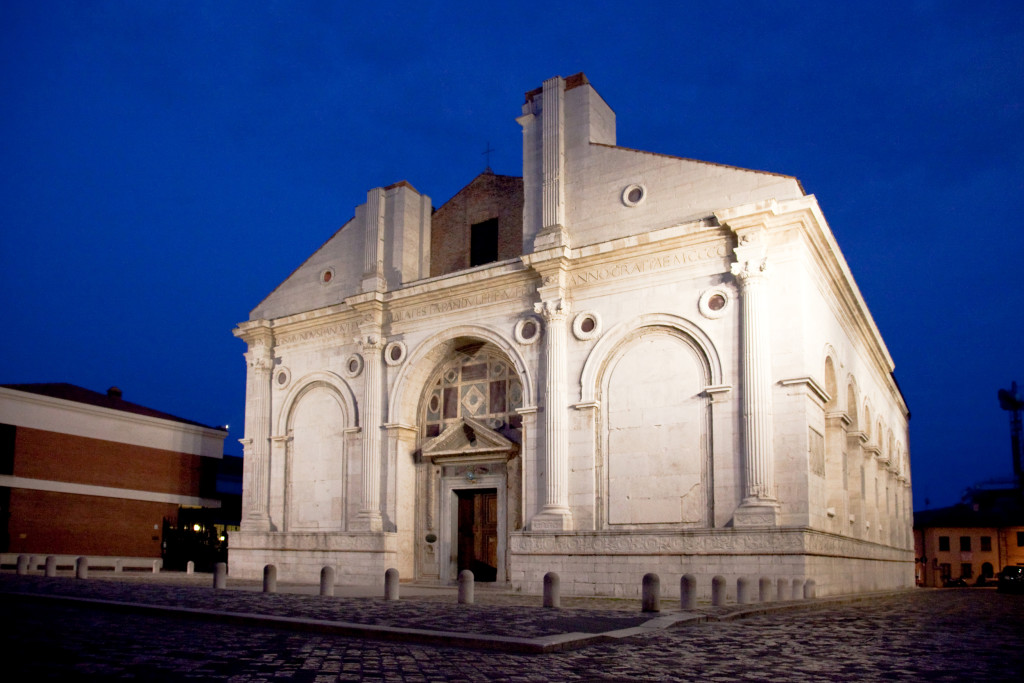 The Malatesta family invited many artists and intellectuals to their court, including Brunelleschi in 1438, who was called to supervise the building of the Castello Malatestiano, and Pisanello who designed medals for the family. However, perhaps the most illustrious figures to make their contribution to the culture of the entire period were the philosopher, writer, architect and artist theoretician, Leon Battista Alberti and the artist Piero della Francesca. Alberti was given the task of designing the Tempio Malatestiano which along with Castel Sismondo represent the monumental heritage and power of the Malatesta family. While the Castle maintains a feudal appearance with its towers and fortified walls, the Malatesta Temple displays all the effects of the new style based on classical architecture. The struggle of Sigismondo with Frederico of Montefeltro, an ally of the Pope, for the control of nearby Urbino lead to his excommunication by Pope Pius II and eventual defeat by his Umbrian rival. His death in 1468 heralded the decline of the Malatesta family and their final downfall came in 1528 when Pope Clement VII expelled them from the town. 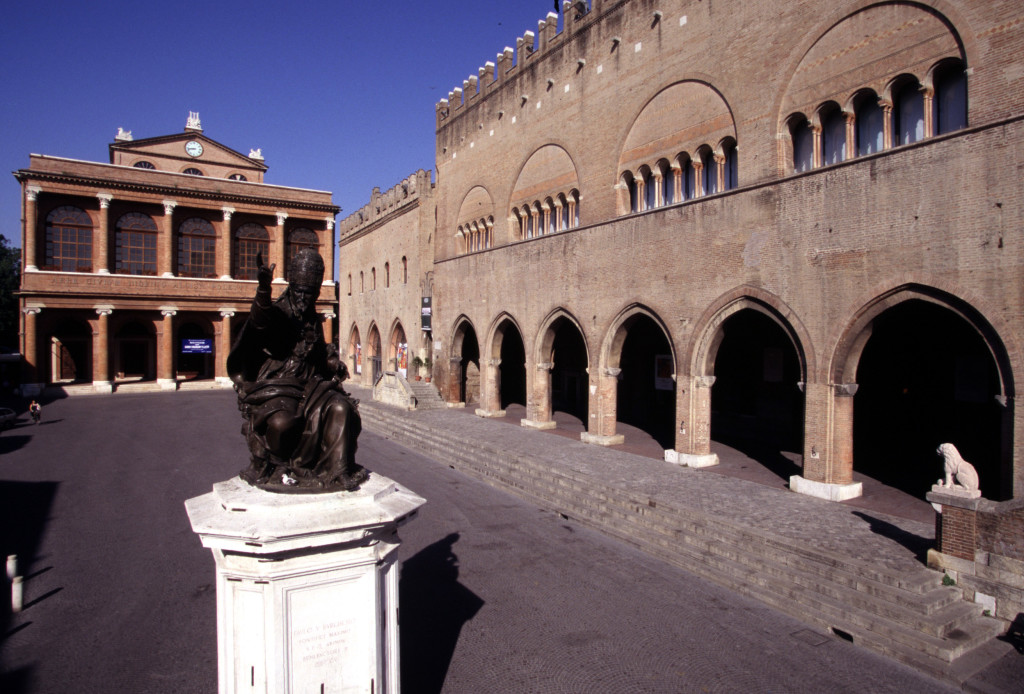 Piazza Cavour Square with the monument to Paul V

Rimini remained under the control of the Papal States for nearly 300 years. This period was characterised by a general decline which was neither helped by earthquakes in 1672 and 1786 nor various sackings of the city, culminating with the arrival of Napoleon Bonaparte in 1797. In 1815 the peace settlement returned the Romagna area to the control of the Church. This led to the growth of secret revolutionary organisations – the carboneria – that would play a leading role in 1831 and 1845 in the struggle for the unification of Italy. In 1860 Rimini and the Romagna were annexed to the Kingdom of Sardinia (Piedmont) laying the foundations for the new Kingdom of Italy.

During the 19th and 20th centuries Rimini developed as a seaside resort. The first bathing establishment was founded in 1843. In 1908 the Grand Hotel was opened and the growth of the bathing as a popular activity, which was greatly encouraged in the Fascist period, led to numerous establishments being opened along the coastline. 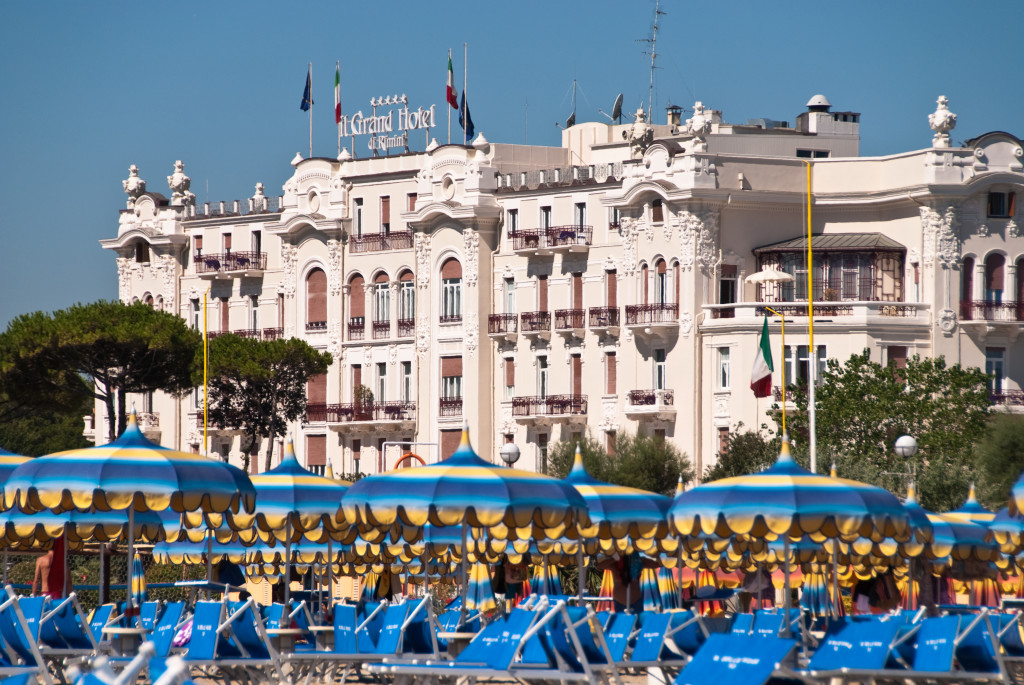 The appearance of Rimini was profoundly changed by heavy bombing during the Second World War and post-war reconstruction. Today Rimini is a modern city conserving many traces of its past which can still be seen in the streets in the heart of the city. The city continues to be a major seaside resort centred around the Grand Hotel and the Fellini Park while it has never forgotten that in the time of the Roman Empire it was an important port and its modern day canal port is still thriving with shops and bars.