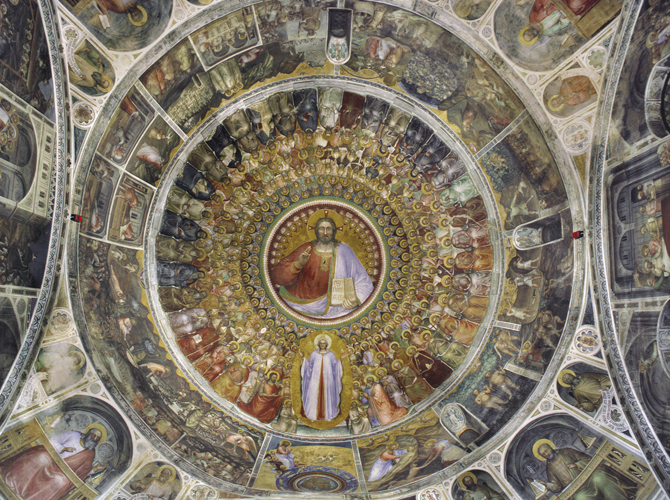 The Cathedral of Padua was built over the remains of several older churches. The oldest, which dates to the early Christian period, was on the site of the modern churchyard. The cathedral was consecrated in 1075 but was badly damaged in 1117 by a strong earthquake. The building we see today took shape between the 15th and 18th century. With its unfinished brick façade, it is situated between the baptistery (to the right) and the Archbishop’s Palace (to the left). 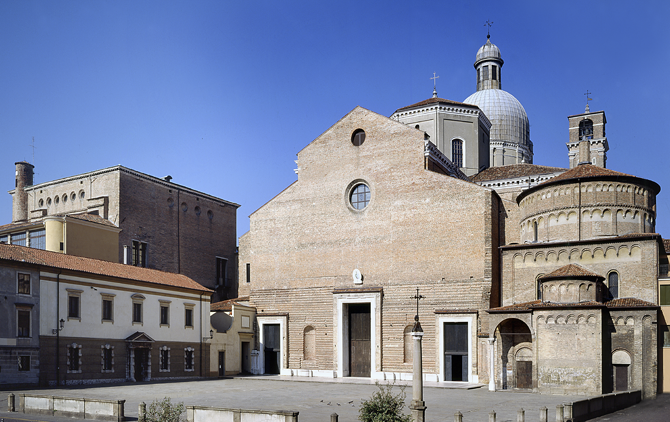 The interior has much in common with that of the Basilica of Santa Giustina and is divided into three naves with a transept and a number of side chapels dedicated to the Virgin Mary and other principal saints. These are full of important sculptures and paintings including a cenotaph (a funereal monument in honour of a person but not containing their remains) for Francesco Petrarca (Petrarch in English), who was canon of the cathedral. You should also visit the Virgin with Child by Giusto de’Menabuoi, was also responsible for the frescoes in the baptistery. There are also paintings of saints by Giorgio Schiavone e Giandomenico Tiepolo and a Descent from the Cross by Jacopo da Montagnana. In the suggestive crypt you will find 16th century relief sculptures by Tiziano Aspetti and a curiosity. In the right-hand transept there is an icon depicting the Madonna and Child, which apparently belonged to Petrarch who believed it to be the work of Giotto. Beneath the cathedral there are mosaics, the remains of columns, terracotta urns and carvings as well as ox and horse bones which are probably the remains of ancient pagan sacrifice.
The baptistery dates to the 12th century but the fresco cycle by Giusto de’Menabuoi was completed in the second half of the 14th century. It was commissioned by Fina Buzaccarini, wife of Francesco il Vecchio da Carrara. It is square building with a high cylindrical drum supporting the dome, and an apse with a small dome. The frescoes depict more than a hundred scenes from Genesis, the apocalypse and the life of John the Baptist to whom the baptistery is dedicated.