Man as a Bird. Images of Journeys 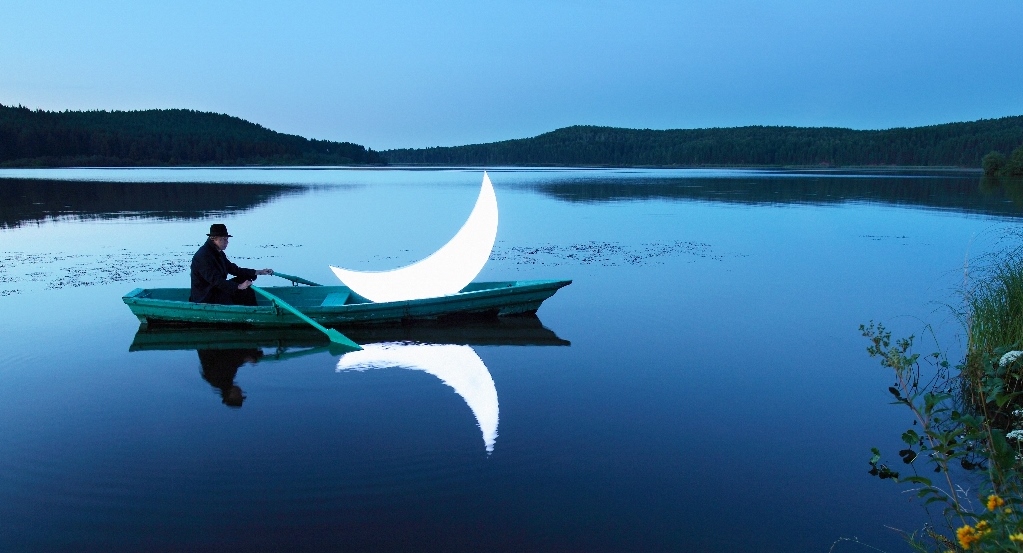 The Pushkin State Museum of Fine Arts debuts on May 10th with the exhibition "Man as Bird. Images of Journeys" organized as part of the Collateral Events of the 57th International Art Exhibition.

Throughout history, we have expanded the boundaries of the visible and found new perspectives. The development of optics and the evolution of art have gone hand in hand, and artists were armed first with camera obscura, then with video cameras. These improvements in optics have always been aimed at improving our knowledge of the world. From expeditions to remote parts of the world, to changing the very way we see things, this process has unfolded in history, corresponding to the inner transformation one goes through in life.

To link classic tradition with contemporaneity, ultimately contributing to reshaping the viewer’s perception is one of the goals of The Pushkin XXI project reflected in this exhibition. This direction of the museum is designed to connect the classic and the new, to relate the Russian and the international art process, to promote a dialogue of the forms of representation of contemporary art, and to present artists who speak the language of this new media.

The exhibition Man as Bird. Images of Journeys invites the viewer to travel across multiple dimensions – space, time and individual experience – all of which may alter their perception of the world and of the self. The initial morphology and structure of the images transforms throughout the journey as a result of the different viewpoints incorporated in the project. Like Jonathan Swift’s Gulliver or Lewis Carroll’s Alice, the viewer will experience unusual proportions and perspectives: the world transforms, the point of view changes, the real and the imaginary intertwine and no longer correspond to our former beliefs.

The art journey turns out to be not just merely geographical – here the structure of space reflects the worldview. Travelers from different eras have interpreted this structure in various ways; it could become patchy and spotty because by describing just the stops, they might miss the distances between them.

Along the journey, the angle of vision expands – from the familiar 120 degrees of human vision to the 360 degrees of a bird’s eye. Space built in accordance with the laws of linear perspective, familiar to the viewer since the Renaissance, seems right only at first glance. A viewer placed in the center of a panorama often loses his ability to see details. They merge within an overall undifferentiated flow.

Persistent distortion of reality, sudden transitions from close up to distant perspective result in the viewer’s loss of ability to hold a certain position; at some point being critically remote from details leads to partial blindness. Disturbances of the space and the vortex of time pull the viewer into a black hole, leading him to a synthetic multilayered experience of expanded vision, like a lonely traveler attempting to find his own self. Sound, tactile sensation, and haptic vision allow us to experience one more space – the space of memory, which foregrounds the individual journey through the self. Ultimately, perceptions and feelings shape our attitude towards the space outside and memory inside, and colour our impressions in unexpected tones. The vanishing point bringing together the bird’s-eye view and the human perspective, the machine and the human eye, spaces of history and individual memory, all of this is inside each of us, and the ultimate goal of this odyssey is to know oneself.

The exhibition is supported by the official partner  Mail.ru Group, technical partner Barco and the Peganov family.

Marina Loshak: “This direction of the Museum is aimed at developing new connections between classical and contemporary art, between the Russian and the international creative process, at encouraging a dialogue between representational forms of contemporary art, and at allowing the audience to meet those artists who use the language of this new media.”

Olga Shishko: “For the 2017 Biennale, we have invited internationally known Russian and foreign artists who can extend the angle of vision – from the familiar 120 degrees of human vision to the 360 degrees of a bird’s eye. The aim of the project is to open a gateway into another dimension through which viewers can travel. The artists talk about a lack of physical boundaries and spaces. Many works presented in the exhibition will be included in the collection of The Pushkin XXI.

A cube is lit from inside and, in brilliant blues, depicts a man lying in a bed and watching TV. It represents our childhood home, where fantasy lives. Martin Honert’s (b. 1953) meticulous sculptures are largely inspired by childhood memories. Based on his personal experience, Honert takes the viewer into a symbolic journey through time, which makes it possible to travel without leaving home, and where the scale of images of the memories is distorted.

Private Moon is a visual poem telling the story of a man who once met the Moon and stayed with her for the rest of his life, traveling with it all around the world. Located in unusual ways and illuminating objects around it, the traveling crescent moon allows viewers and random passers-by to experience the sensation of fabulousness of existence. Leonid Tishkov (b. 1953) aims at a lifelong journey with his private moon.

Ca d’Oro is a metaphor of a journey into the creative unknown. Digital streaming of virtual water within the interior of the boat reveals the interweaving of this natural element with the technological medium. Italian media artist Fabrizio Plessi (b. 1940) is renowned as a modern alchemist who plays with elements. He “humanizes” technological tools making them carriers of emotions.

The work Eternity by the Russian art group Provmyza creates a sense of anxiety by immersing the viewer into a multilayered space, where the surrounding reality dissolves, and so does human sight. In this version of the installation, produced specially for the exhibition, the viewer is forced to move along the image and is unable to capture the entire picture at once. The girl’s cry becomes acousmatic, since its visual source is outside the field of view. Thus, the viewers experience the Lilliputian perception, while the little girl of Eternity appears as a giant, incomprehensible to their view.

A cyclic process of lowering the water level in an aquarium with a fish is created by employing video mapping technology. The fish moves chaotically, and in pauses between falls in the water level, it tries to occupy a position at the water’s edge to gain access to oxygen. The work by Dmitry Bulnygin (b. 1965) is an allegory of life with its sudden cataclysms, which we are unable to control.

A series of works furnished on a horizontal canvas of Venetian textile brings together several themes: the Old Testament, the Gospel, and the contemporary. Together they form a generalized narrative of repentance, returning home and returning to oneself. Her relationship with the media defines Irina Zatulovskaya (b. 1954) as an artist. She paints on abandoned wooden and metal objects that she finds. Traces left on the surface by nature, people, and time are combined with the artist’s ascetic touch of two or three colors, resulting in the creation of an image.

A continuous camera movement makes a journey starting in a park, going into a dark forest, which turns out to be only a small grove in the middle of the plain once the camera ascends to the height of a bird’s flight. Belgian media artist David Claerbout (b. 1969) works with a universal image of a dark tranquil forest, moving the camera in a dispassionate and dynamic manner. The space depicted by him is not specific, it is generic, and its details do not just reflect the perceived object, but reveal the process of perception.

This sound sculpture by Yuri Kalendarev (b. 1946) creates a sounding universe. He redefines the concept of sculpture through a new aural experience, going beyond the sound itself, into the realm of pure acoustics. Kalendarev’s journey is primarily a personal experience of internal search. The installation leads us through artist’s personal creative journey and represents a space of art studio or a temple, where creative meditation is performed.

The installation features photographs of empty landscapes shot by the artist and geographer Sofia Gavrilova (b. 1987) during her geographical expeditions through Russia. The work consists of vertical panoramas reminiscent of plans for geological tests. Landscapes akin to cross-section samples provide an opportunity to focus on the line of the horizon itself, which is often difficult to see in urban territories, but which is an integral part of our view of the world.

The private room represents a global digital home. In the world of virtual networks, as in the world of television, to which the installation was originally devoted, our journeys and memories are linked in a single network that connects us with the world. This work is one of the media installations by a Japanese media artist Masaki Fujuhata (b. 1956) examining the possibilities for communication within virtual spaces.

The work of Argentinian artist Mariano Sardón (b. 1968) presents urban landscapes as databases consisting of visual maps. Trajectories of gazes of the viewers around the landscape images are superimposed, which results in enchanting colored images. The work also reminds the viewer that landscape images of the 15th century depicting cities from the bird’s eye view, although detailed and precise, were the product of reflection rather than observation.

In Exploded Views 2.0, a visitor physically navigates through an audio-visual city landscape built up from point clouds with a 3D scanning technology that creates a surreal and dreamlike atmosphere. A combination of movement and 3D interactive imagery in the installation by the Dutch media artist Marnix de Nijs (b. 1970) purposefully places the viewer in an intensely absorptive experience. Images woven from reality transfer to the sphere of the imaginary.

With the support of Institut français de Russie

In her site-specific installation, Tanya Akhmetgalieva (b. 1983) reflects upon the personal life odyssey of each of us. The work draws the viewer into a crazy endless swirl of waves, splashes and noises. The journey’s climax is an encounter with a ghost ship that makes one pause and meditate.

Producer and artist Semyon Aleksandrovsky (b. 1982) invites a visitor coming to the exhibition in Palazzo Soranzo Van Axel to take an audio journey to another museum. The headset one gets at the start of the route plays the sounds of a walk through the Pushkin Museum in Moscow. While visitors wander through the courtyard of the Venetian palazzo, they are immersed into the ambience of the Moscow museum. The spatial borders are erased, as if there was no distance between Venice and Moscow.

Man as a Bird. Images of Journeys 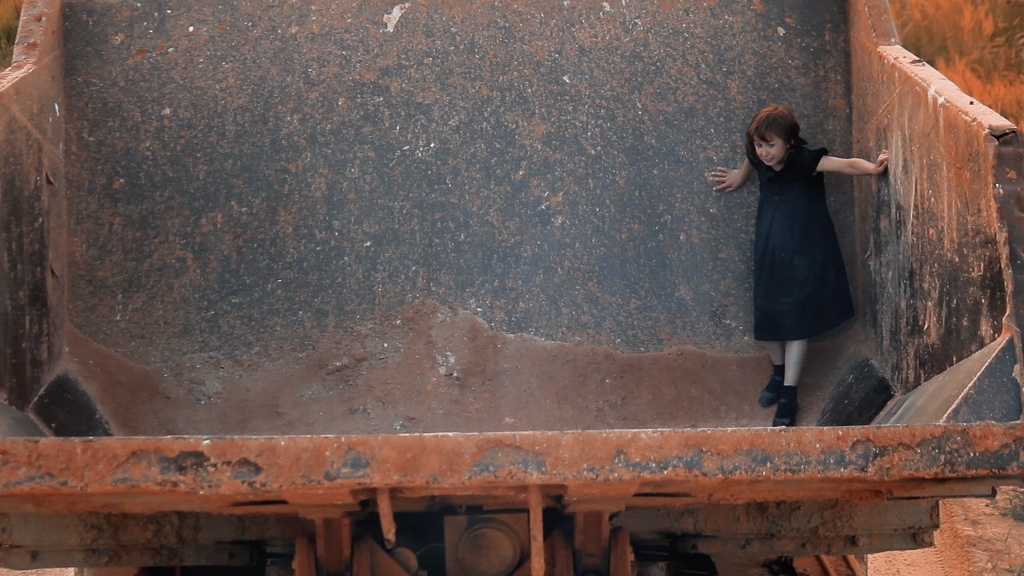 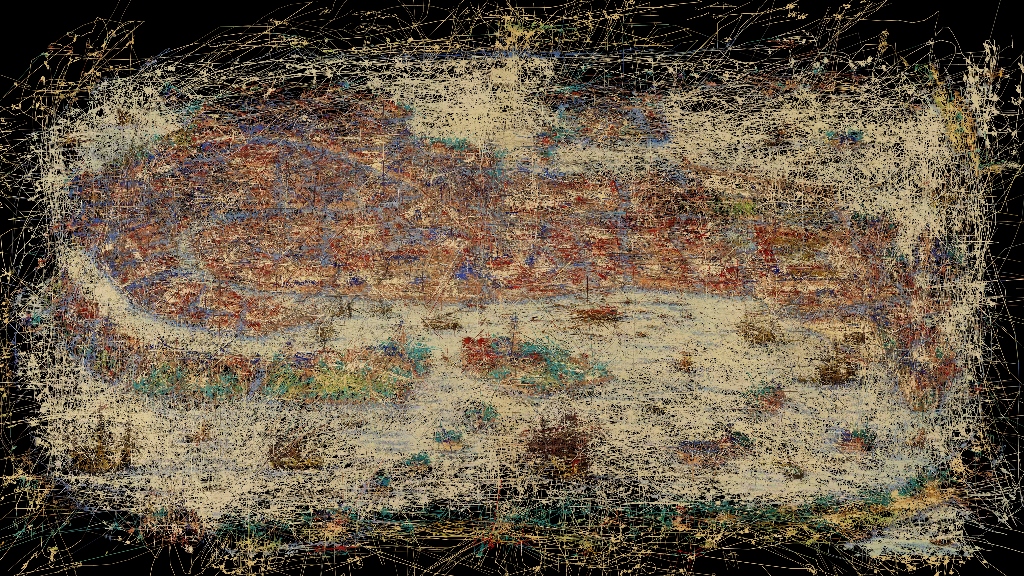 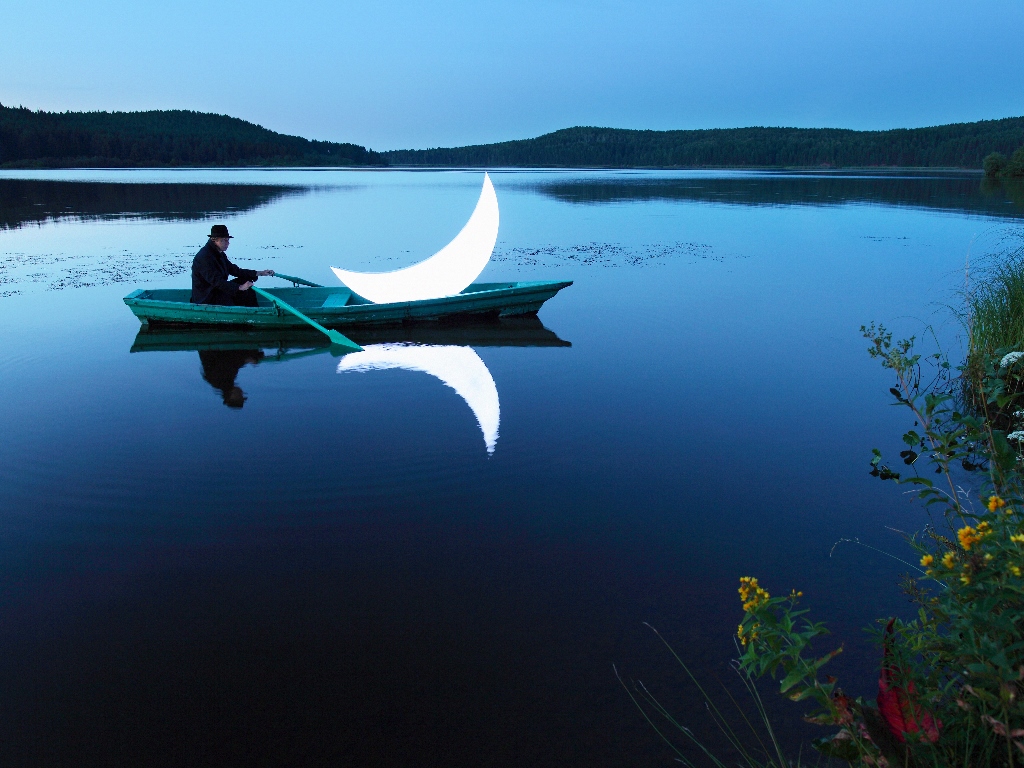 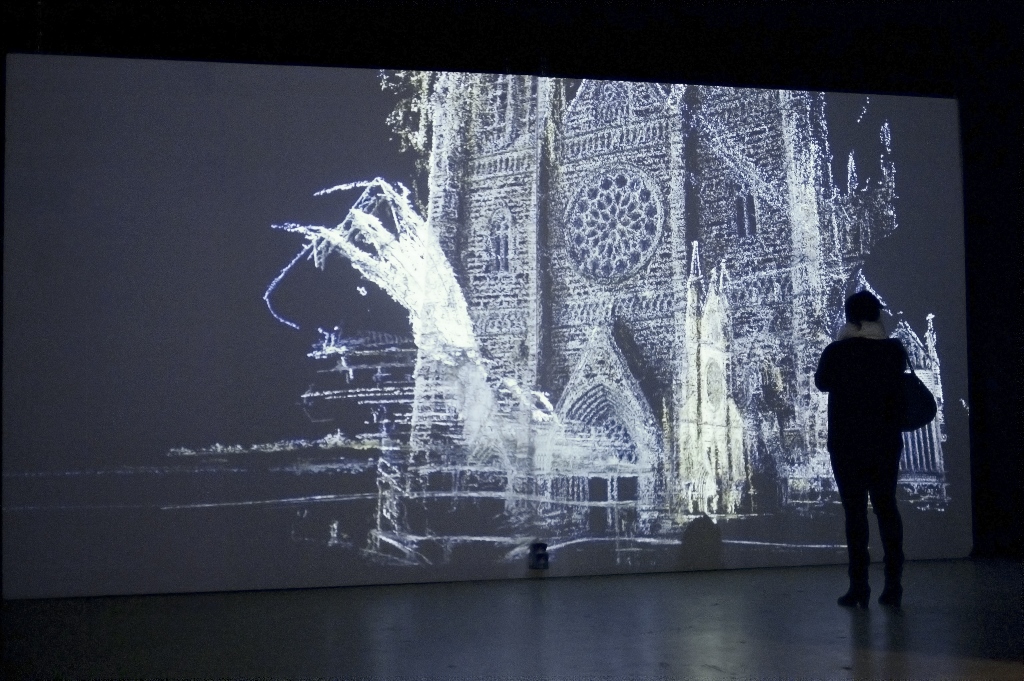 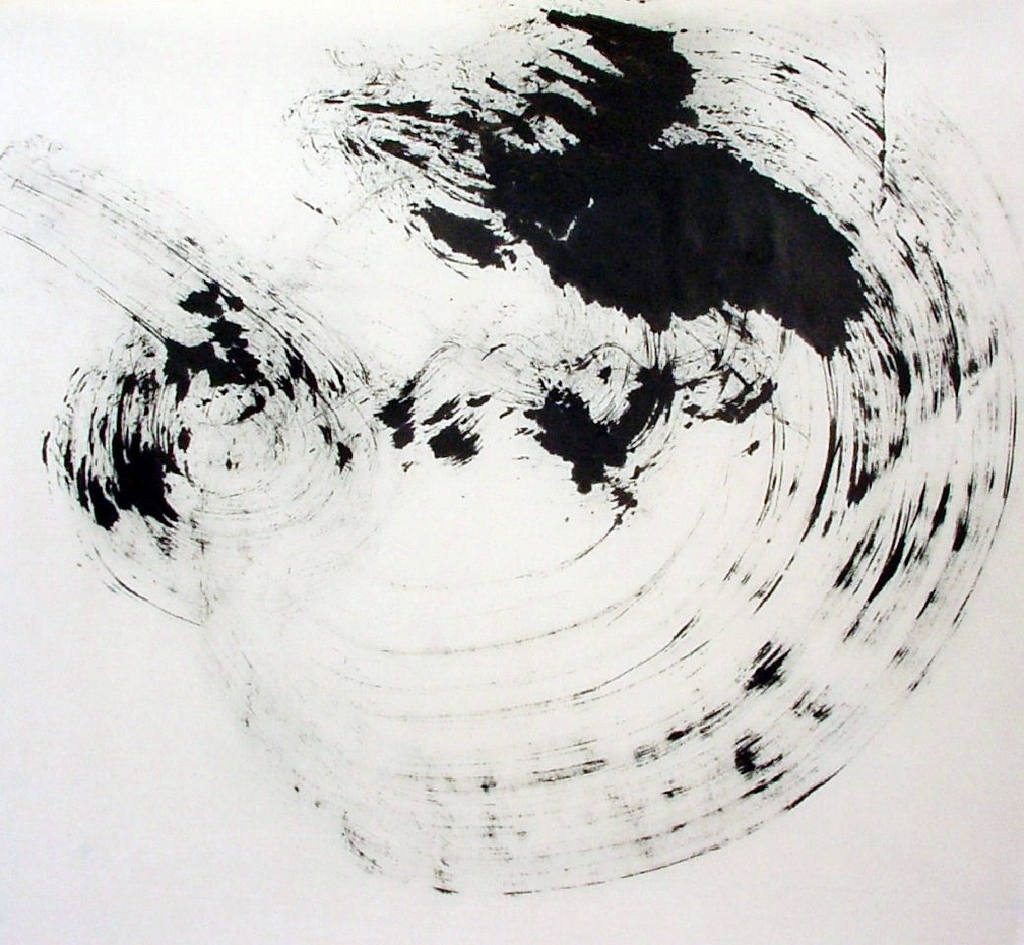 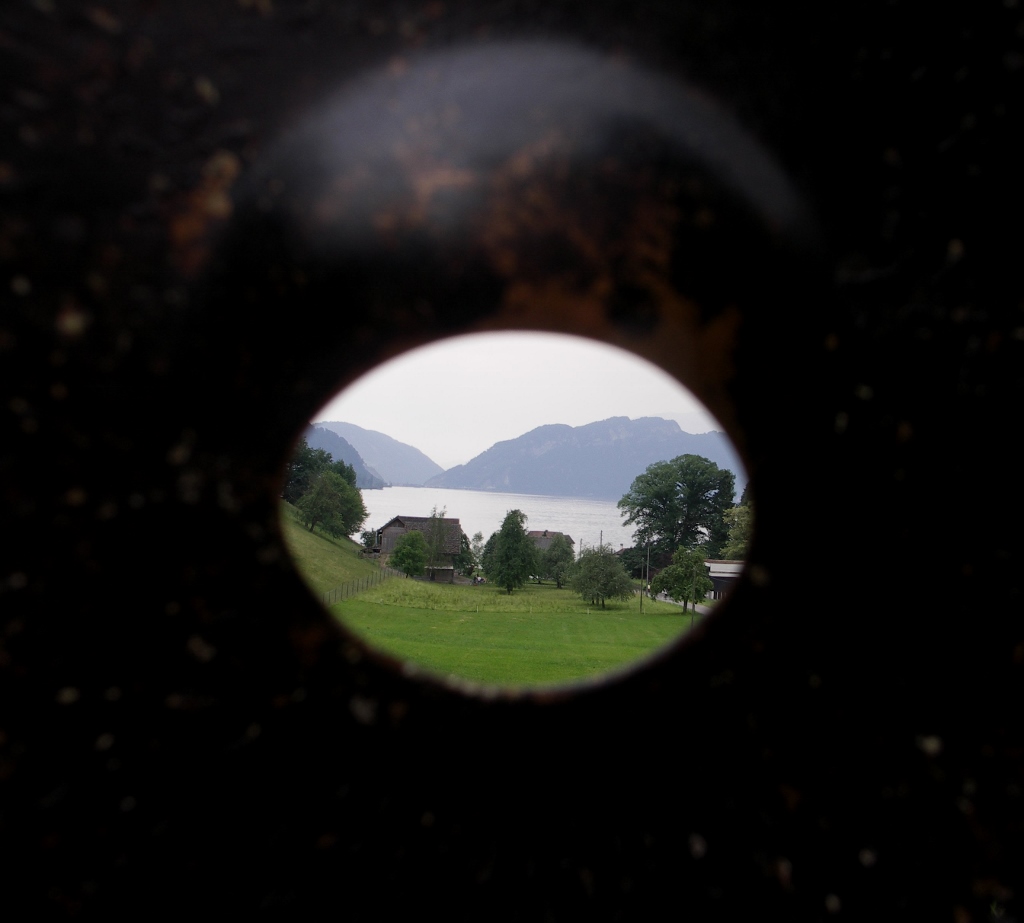 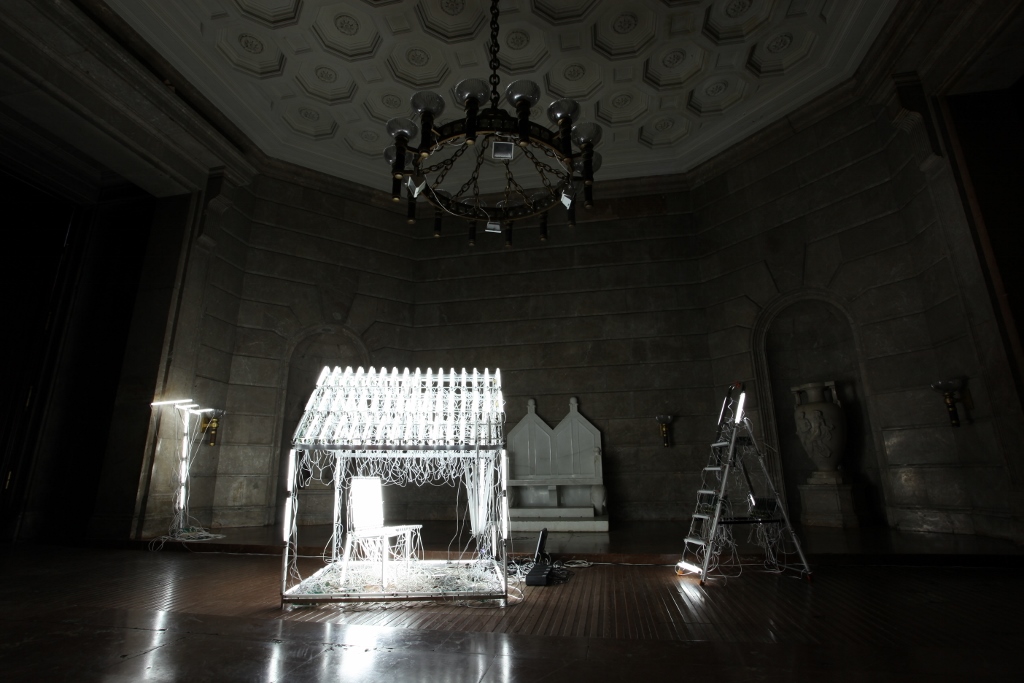