Piazza del Popolo in Faenza: One of the most beautiful squares in Italy 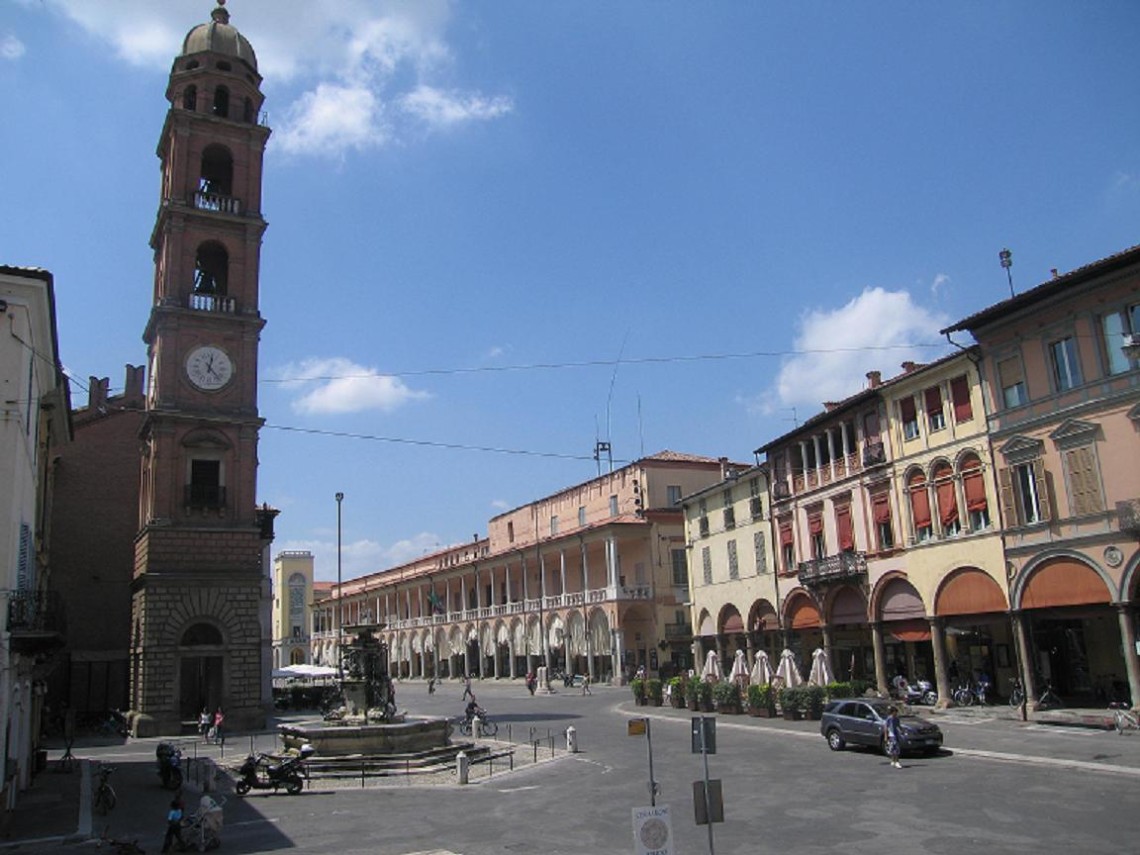 In Faenza Piazza della Liberta is joined to Piazza del Popolo making up what can truly be called one of the most beautiful communal spaces in Italy. Two splendid porticos topped by spacey open galleries delimit the square which acts as a type of salon where the town’s inhabitants can meet up and mix together. Just come here in the late afternoon or on a morning when the market is held (Tuesdays Thursdays and Saturdays) to see the townsfolk in action. And this isn’t something new- it has always been an important meeting point. In Roman times this was the intersection the two main axis (north- south/east-west roads) of the Roman encampment in the ancient Faventia, which had been founded in the second century BC where a bridge crossed the river Lamone. The Via Emilia passes through here and even today 2200 years later it still represents the backbone of the whole Emilia Romagna region, linking Rimini (Roman Arminium) to Piacenza (Placentia) and continuing to Milan (Mediolanum).

One of the first things to catch the eye is the clock tower, the Torre dell’Orologio, an extremely accurate post-war reconstruction of the 17th century tower which overlooks the ancient intersection mentioned above. It was destroyed in 1945 by retreating German troops who wanted to deprive the allies of an important observation point.

Next to the tower you will see the imposing Palazzo del Popolo which is opposite the town hall, the Palazzo del Municipio, which was formerly the residence of the Manfredi rulers of the town in the late mediaeval and Renaissance periods. It is important to remember that during the Renaissance and above all in the 18th century a lot of work was carried out to restructure the whole area of the square. The main objective was to make the portico and galleries more regular and uniform creating the harmonious backdrop that is so much admired today. The resulting harmony of the galleries, the columns and the modern lightly coloured curtains hanging under the arcades make the experience of being in the square a real pleasure. The project was the result of a collaboration between the ruling council of the city and the shopkeepers who carried out their activities in the square: a real example of urban requalification.

In June the square hosts the highly appreciated and colourful flag throwers of the Palio di Niballo the traditional horse race which dates back to the Middle Ages and takes place every fourth Sunday of June in the Bruno Neri Stadium. On 5 January a effigy of Niballo is burnt- a huge figure with the features of Saracen warrior – a traditional enemy.

In the centre of the north side of the square there is the Voltone della Molinella- an umbrella shaped vaulted ceiling decorated in 1566 which leads to the theatre in Piazza Nenni which has recently been restored along with the square. When you enter into the square you can see the lovely neoclassical façade of the town’s opera house the Teatro Comunale Masini which was built at the end of the 18th century, commissioned by the “Accademia dei Remoti” a group of artists and intellectuals which had been formed in 1673. The theatre keeps the cultural traditions of the town alive and is still a popular destination for the townsfolk.

And now to complete our tour of the city we are going to visit the International ceramics Museum.