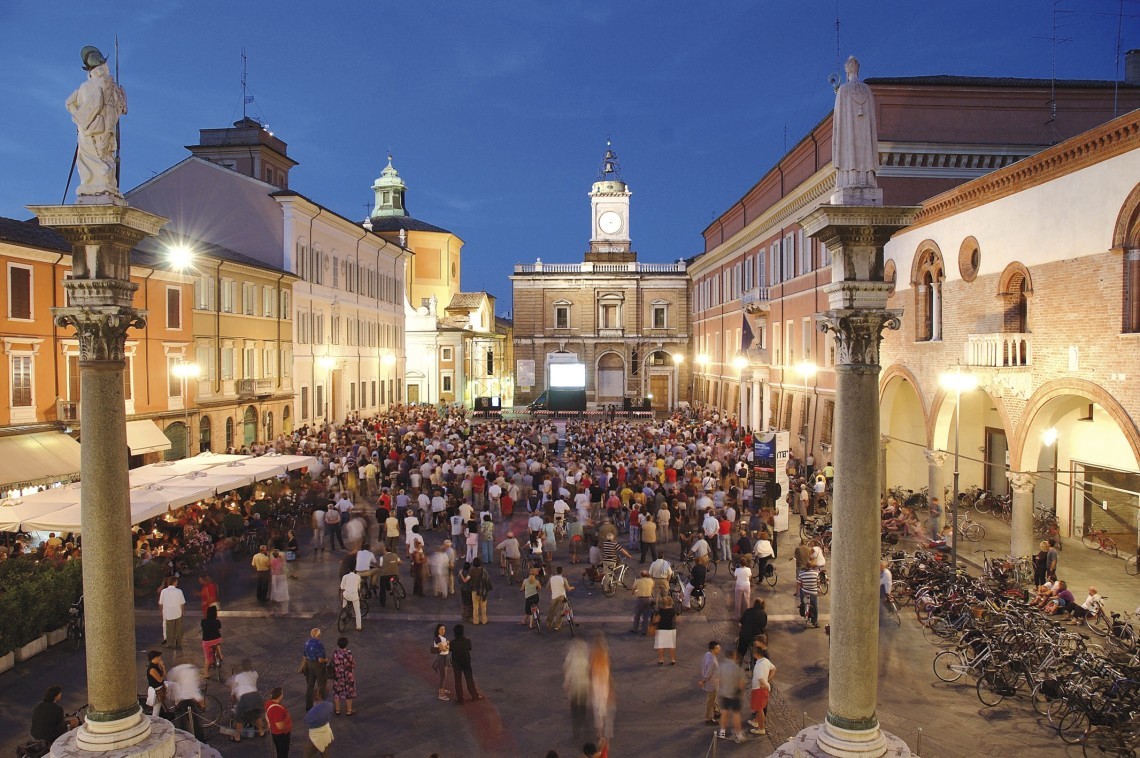 The history of the foundation of Ravenna has been lost over the centuries. Legend has it that the city was built by settlers from Thessaly, or more likely by the Umbrians and after them the area was occupied by the Etruscans. Later, in the second century BC, the Po Valley was conquered by the Romans, who rationalised territory according to custom: they built roads, aqueducts and developed the city according to their urban geometry. It was not easy, because the small town was built on some sandy islands of the sea lagoon. The convenience of this position was exploited by the Emperor Caesar Augustus in the first century BC, when he reorganised the military defense of the empire and chose Ravenna as the seat of the Eastern Mediterranean fleet. He created the gigantic port of Classe, from where he could control the entire Adriatic. 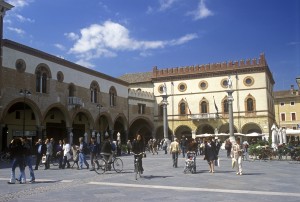 The most important period in the life of Ravenna began in 402, when the Emperor Honorius moved the capital of the Western Roman Empire here. Galla Placida ruled here, his famous sister and daughter of Theodosius I, who built the first architectural masterpieces of Ravenna around 430 AD : the cruciform Chapel of San Lorenzo, now known as the Mausoleum of Galla Placidia and the bright and spacious basilica of San Giovanni Evangelista.

In 476 Odoacer, a general of Germanic ancestry, deposed the last Roman emperor Romulus Augustus and proclaimed himself Patrician, de facto ruler of the country, making Ravenna its capital.

In 493 Theodoric (454-526), king of the Ostrogoths, invaded Italy. Ravenna remained the capital of the kingdom and there he ruled wisely and peacefully for thirty-three years, erecting new buildings and looking out for its citizens’ well-being. Educated at the court of Constantinople and being Arian, the king ordered the building of some beautiful churches for his religious community some of which include, the Arian Baptistery and the Basilica of Christ the Saviour. The latter was twice reconsecrated and is now called the Basilica of Sant’Apollinare Nuovo.

In 520 Theodoric, thinking about his own eternal resting place, built his tomb on the land of the Gothic cemetery. It is a polygonal building with two story stone Istrian Monolithic dome, famously known as Mausoleum Theodoric. The demise of the Gothic sovereign’s reign was overshadowed by the killing of the last two ancient philosophers: Symmachus and Boethius, who were consuls to the royal court and were found guilty of treason. 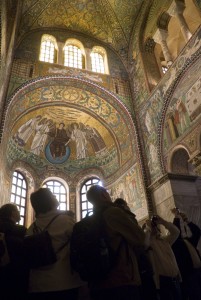 In 540 the Byzantine troops led by Belisario conquered Ravenna. Justinian I (483-565) was intent on reuniting the lands of the Western Roman Empire with his empire, but his ambitious projects were not completely successful. Ravenna was transformed into Exarchate, the outpost of the sophisticated policy of Constantinople and of Eastern theology in the West.

The Byzantine empire has left an indelible trace in the spiritual and artistic life of Ravenna. At the time of Justinian, thanks to donations by the rich banker citizen Giuliano Argentario, two unparalleled masterpieces were built: the Basilica of San Vitale and the Basilica of Sant’Apollinare in Classe, consecrated in 548 and in 549 by Archbishop Maximian. After

the death of Justinian the prosperity of Ravenna began to decline and ended completely in 751 with the occupation of the Lombards, putting an end to the influence of Constantinople which had lasted about two hundred years.

Ravenna then survived the feudal wars, the Archbishop’s governance, the common free state and the power of the Da Polenta  lords. The great Dante died here in  1321 and his post-mortem destiny was no less dramatic than his life. In 1431 the city was occupied by the Venetians, but after a few decades Ravenna became part of the Papal State, until it was annexed to Italy in 1860.

At the beginning of the modern era in the central square of Ravenna, now called Piazza del Popolo, the statues of the main holy city were erected: San Vitale and Sant’Apollinare. Previously, the Venetian Palace in the square was constructed with base columns from the Gothic occupation, four of them engraved with the monogram of King Theodoric.

From the second half of the nineteenth century to the early twentieth century. Ravenna seemed to have awakened from its long sleep, attracting the attention of poets and artists from around the world. Behind the dark, brooding walls of the basilicas suddenly opened a different universe, looking in on our souls with the wide eyes of the subjects in the Ravenna mosaics.