Revolutjia. From Chagall to Malevich, from Repin to Kandinsky 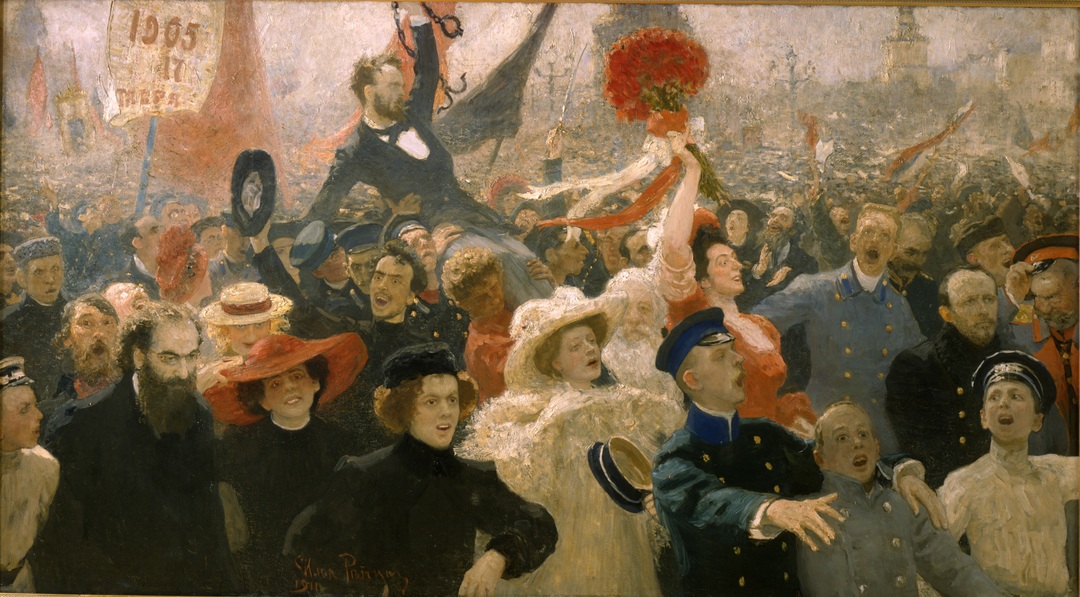 An exhibition of Russian and Soviet art from the Russian State Museum at MAMbo, The Bologna Museum of Modern Art

After the Russian Revolution in 1917 artists set out to fulfil their aspirations and rebuild the world based on completely new principles. Above all, they believed, and managed to make others believe, that it was possible to  make  a totally new model for Man.

Westerners are familiar with the works of Vasilij Kandinsky, Kazimir Malevic, Marc Chagall, Aleksandr Rodchenko, Natal’ja Goncharova and  M.Larionov. Usually they divide the art of the period into two distinct groups: works from the 1920s characterised by the Russian avant-garde , and socialist realism  of the Stalinist period in the 1930s. However, the development of painting in Russia can also be approached in another way starting with the work of the “the Itinerants” or “Wandering  Painters” – Peredvizhniki- in Russian. This group was mainly active in the second half of the nineteenth century. Their aim was to depict the reality of life in Russia in all its spiritual, historical and social expressions. One of the most distinguished artists in the group was the painter Ilya Yefimovic Repin who would later become the teacher of many Soviet artists associated with Soviet Realism. Two canvases from his mature period are on display at MAMbo, however, they only partially reflect the breadth of his artistic and social ideas. “What Freedom!” was painted in 1903 when the activity of the Itinerant painters had already past its prime. It is a hymn to hope and the desire to achieve happiness and freedom. However, rather than depicting young peasants or workers the panting shows representatives of the middle classes. In fact we see a  young woman and a student fully clothed in the “rebel” waves of the Gulf of Finland. We know that Repin was not overly satisfied with his painting, complaining that it gave an unmerited compliment to students coming from rich families. This 1905 uprising is depicted in the canvas called “17 October 1905” where we see the same students, young women and rich gentlemen. 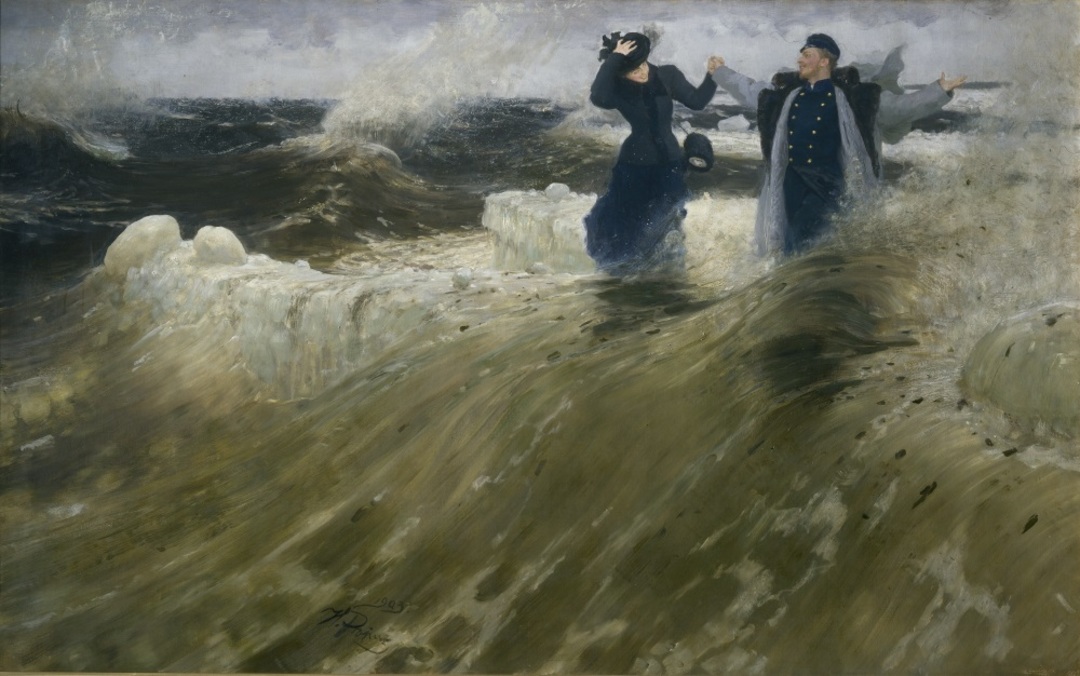 One of Repin’s disciples was Valentin Serov, the famous master of the realistic portrait. In the exhibition you will find his painting “Soldiers, Bravo lads, where is your glory?” which takes it name from a popular song and depicts the massacre of unarmed protestors in St Petersburg on the 9th January 1905, a tragedy which Serov witnessed himself. In protest he resigned his post at the Academy, and gave the painting to Maxim Gorky.

In his “Portrait of the Ballerina Ida Rubinstein” Serov departs from his usual realistic style, preferring a symbolist approach that was popular with the “Mir Isskvstv” (World of Art ) association, expressing the concept of “Ars gratia artis” or Arts for Arts Sake. Among  Repin’s students we also find Isaak Brodsky who would become a pillar of socialist realism. The exhibition displays a monumental panel which celebrates one of the most important moments in the early period of Soviet history  entitled “ the Delivery of the flag of the Paris Communards to the Muscovite Workers on the Kodykna field” (1932).

It is an interesting fact that Ilya Repin started his artistic career  studying with an icon painter. It was the same for Kuzma Petrov-Vodkin, an artist who welcomed the revolution with open arms. The four works by Petrov-Vodkin from the  Russian State Museum displayed in the MAMbo exhibition are perhaps not on a par with his greatest works such as “Bathing of a Red Horse” and the “Petrograd Madonna” (which can be found in Moscow’s Tretyakov Gallery)  however, in Bologna you will find “Virgin of Tenderness of the Evil Hearts” (1914-15); “ In the Line of Fire”(1916) Fantasy (1925); and “Workers” (1926).

The first of these “Virgin of Tenderness of the evil hearts” was painted during the First World War and is reaction to the suffering and chaos that was affecting the world and Russia in that period. The title is a synthesis of the names of two types of icon depicting the Mother of God: “Eleusa” (tenderness) and  the “Softener of Evil Hearts”. In the iconography of the scene we see the Virgin dressed in a scarlet veil, her hands raised, recalling the well-known Virgin of Novorod “ Our Lady of the Sign”. Petrov Vodkin was profoundly touched by the ancient Novgorod icons with their characteristic luminous scarlet red colours which “ring out like a bell”. Already in this painting we can see the Petrov-Vodkin’s preferred  palette of red, blue and yellow and his particular vision of perspective. He developed what he called a “spherical perspective”. The sphere is considered to be a perfect form which symbolises the infinity of time and space in the universe. It is though this that he can give his work a symbolic element.

The 1916 canvas  “In the Line of Fire” depicts the Russian army in action. In the foreground we see a line of attacking soldiers, and beyond them a battle landscape in shades of blue. In the centre a soldier has been shot in the heart. With only one foot toughing the ground it is as if he is about to leap into flight. His face is shown with a three quarter view like an angel in ancient Russian icons. None of which is casual since angels are also called the “celestial army” which includes earthly warriors who are fighting for truth.

The canvas entitled “Fantasy” which was painted in 1925 is closely linked to the 1912 “Bathing of a Red Horse”. In both works the centre of the composition is dominated by the form of the scarlet horse. In the earlier painting the horse is calm. Only its front hoof is raised, about to take a step, recalling icons of mounted saints. Around the horse we see a vortex of spherical space. The idealised image of the naked boy rider is of another age and, like the horse, is symbol of Russia. In the 1925 “Fantasy” the horse leaps through the air in a gallop  while the rider is unsure  where the horse is taking him. Below them we see Russia painted in blue- green tones, with log cabins and churches depicted in the spheric persective  as if it were the whole universe.

In “Workers (1926) we see four male figures representing diverse faces of humanity. Their faces are rough; these are men of the earth and the factory. In the foreground we see a figure with a tragic expression. Another with a sincere face reminds of the painter  himself while the face of  third man is diametrically opposed  to the first man and expresses  a certain “detachment of his roots” The fourth figure in the backgound almost seems incomplete.

The synergy of Petrov-Vodkin  and his revolutionary transformations reveals his simple origins and his way of transforming the iconographic traditions into revolutionary canvases. The proletarian revolution was ardently backed by the “Old Believers” including merchants and manufacturers   who on one hand collected and restored old icons and on the other financed the revolutionary movement. Together they dreamed of overthrowing the Romanov Tsars and the strictures of the modern “Niconian” church which had rejected the old faith with the schism of 1654. 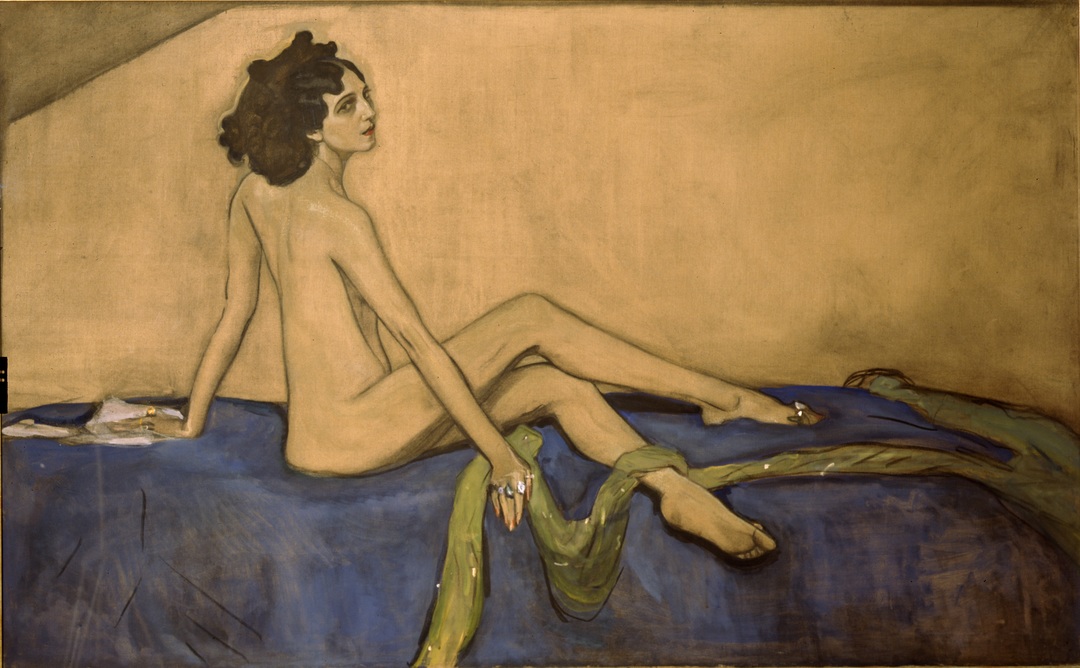 Another painter who depicted the lives of peasants, townsfolk and merchants was also a pupil of Repin: Boris Kustodiev. Two of his works are on display in Bologna. One dates from before the revolution. The “Wife of the Merchant “ was painted in 1915.  Rather than depict a particular individual, its subject is a generalised figure that represents the whole social class of merchants who lived in cities along the Volga river, (the artist himself was born in Astrahan).  His work reflects aspects of the writings of Aleksandr Nikolaevič Ostrovsky who described the everyday life of the Russian merchant classes. We find luminous contrasting colours: the purple dress against the yellow leaves and the gold of the domes. The work recalls the popular art of lubok prints  (scenes from fairy tales painted onto wooden blocks by anonymous common  painters). Another work chosen for the exhibition is the post-revolution, 1921, painted panel entitled “The 2nd Communist International Congress Gala in Uritsky Square July 1920”. This is type of collective portrait of the people who had won the revolution. In the background we can see the outline Winter Palace in the shadows, representing the past, while in the foreground we see a crowd of people celebrating carrying red flags, the symbols of the triumph of the revolution.

Red has always been a popular colour in Russian culture and it has an important place in both old Icons and Soviet art. It is no coincidence that terms “beautiful” and “red” are both represented by the same word in old Russian.

In the 1930s Socialist realism in art was carried forward by painters such as Alexander Samohvalov, Vladimir Malagis (both pupils of Petrov-Vodkin), Alexei Pakhomov, Konstantin Juon, Isaac Brodsky, Vasily Kuptsov, the sculptor Vera Mukhina and other artists whose works are displayed this exhibition at the Modern art gallery of Bologna,  Mambo.

“Revolutjia”. From Chagall to Malevich, from Repin to Kandinsky 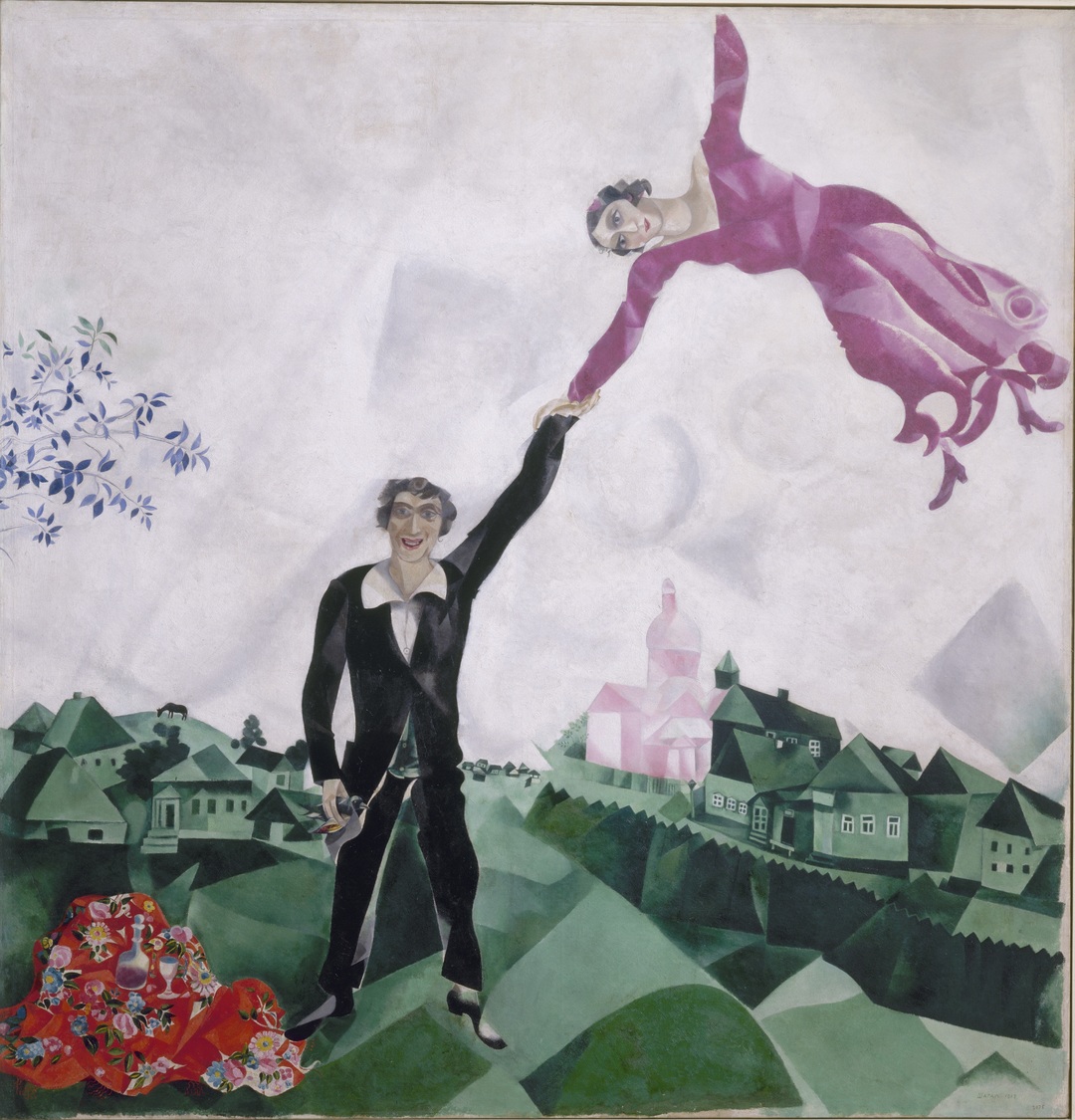 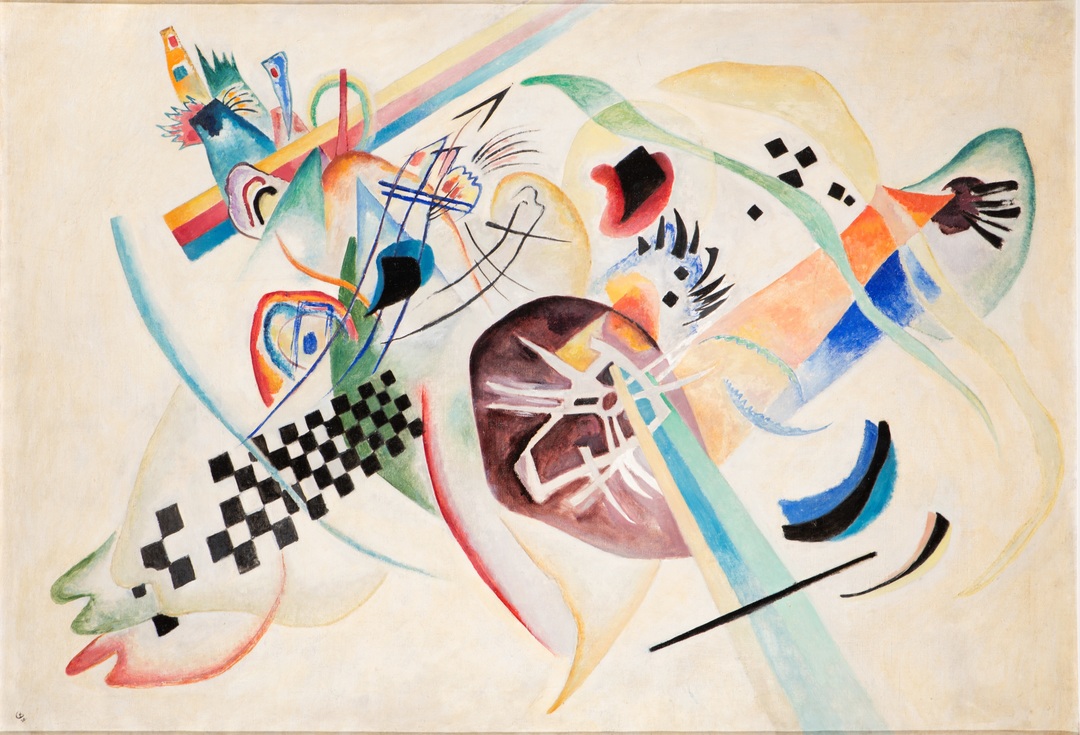 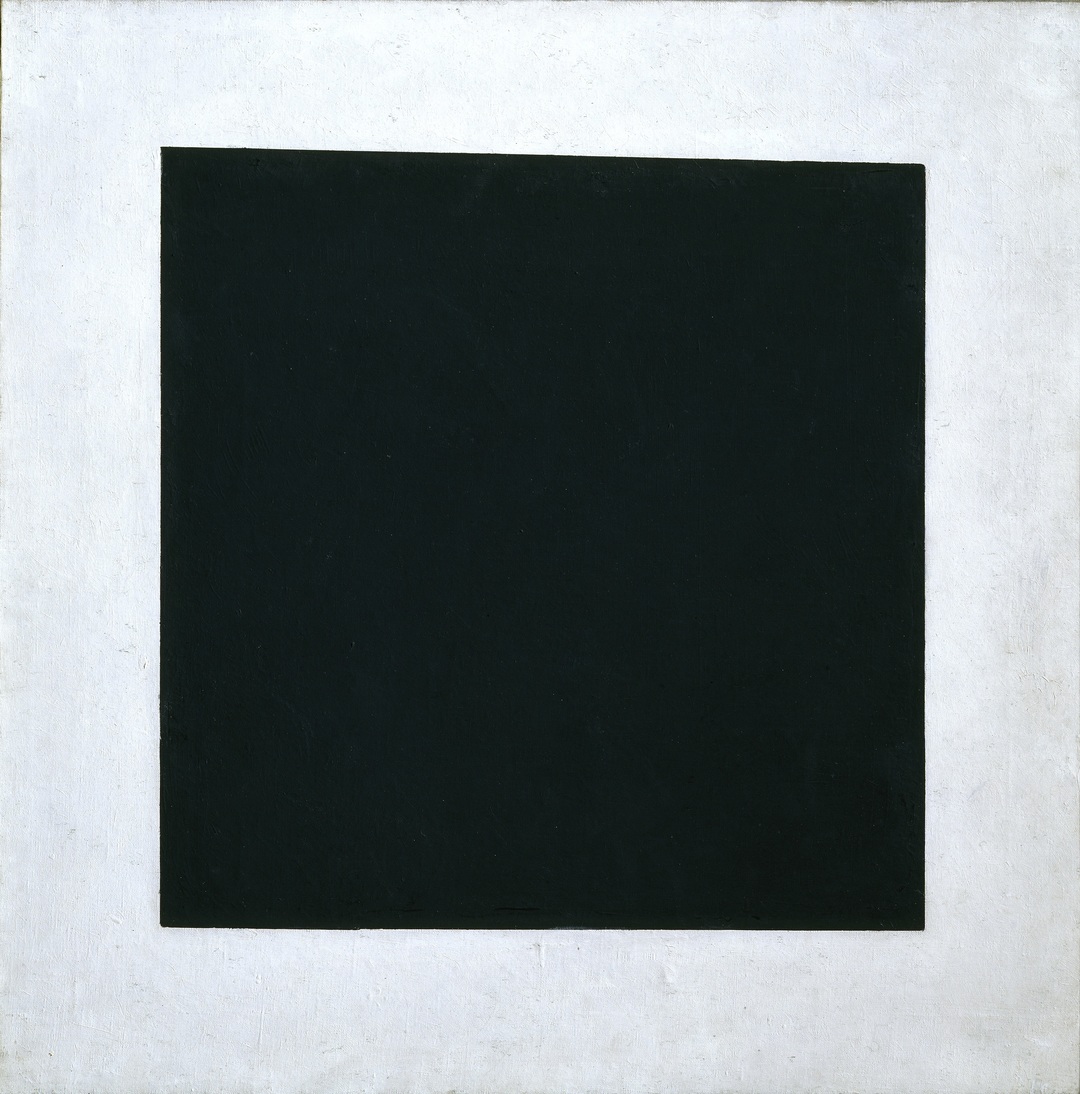 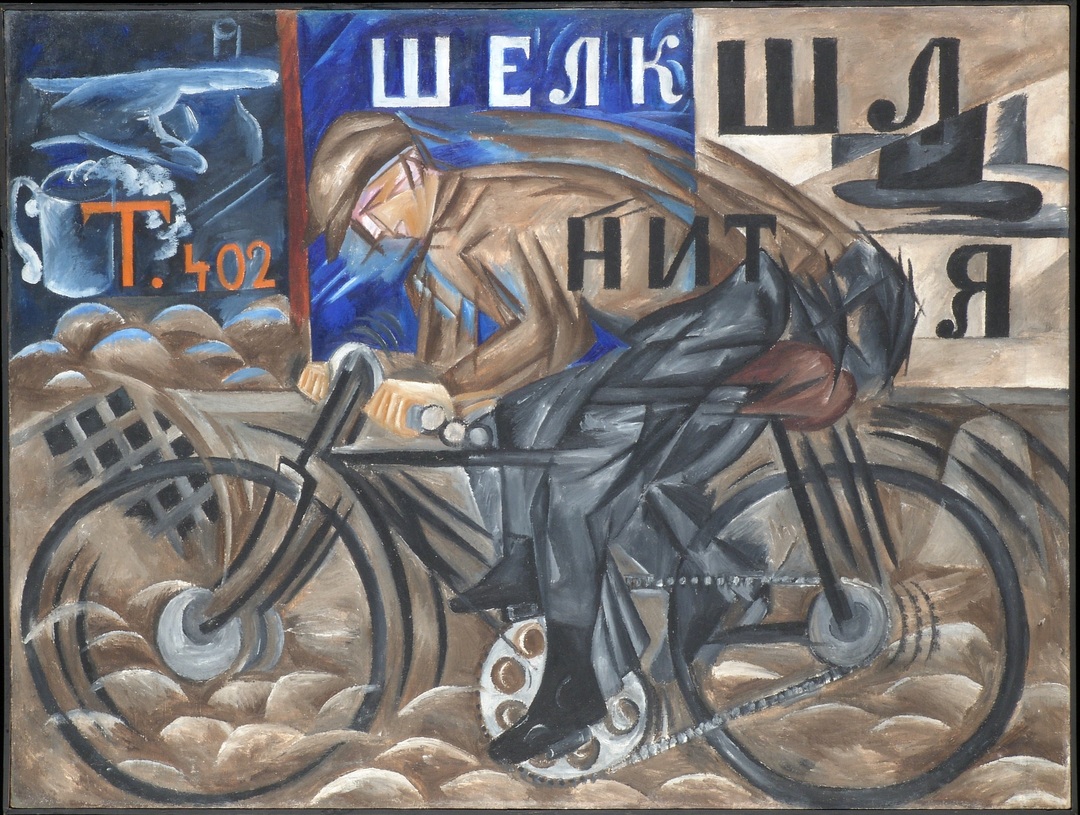 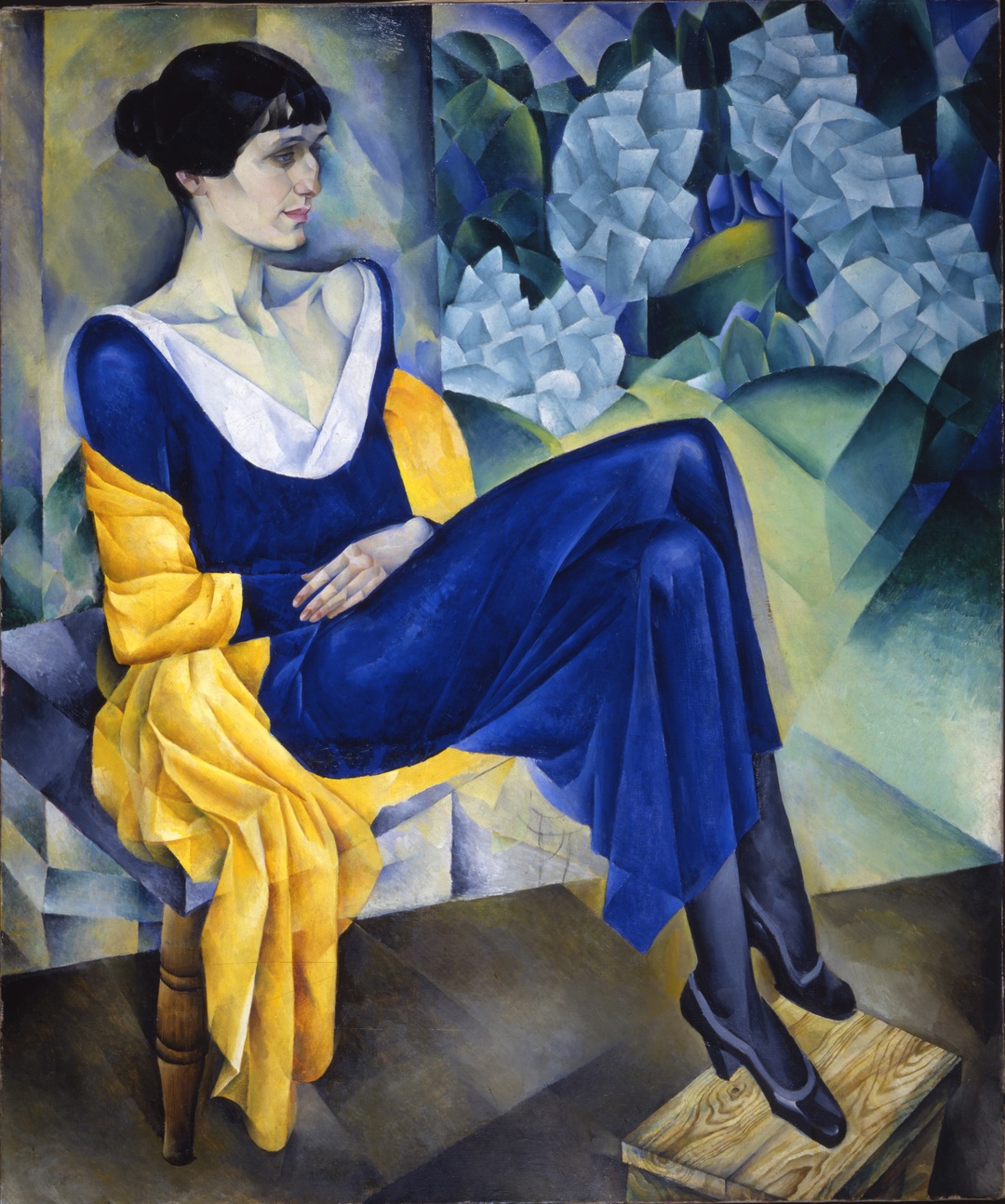 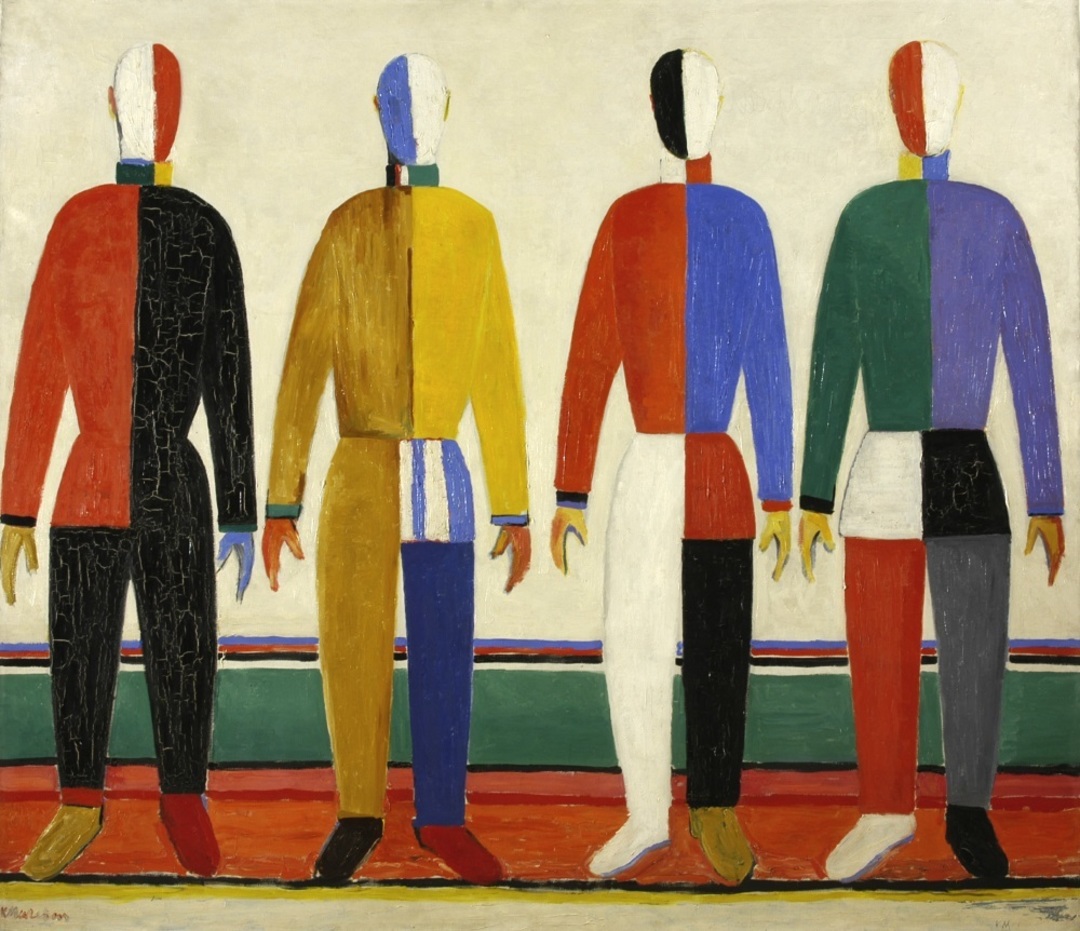