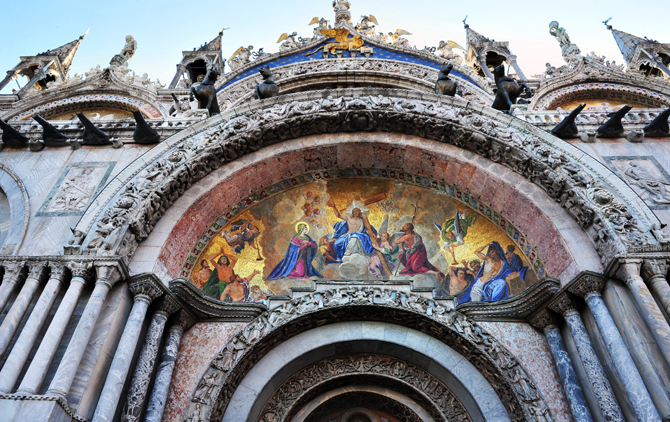 When seen from afar, the domes of St Mark’s Basilica often give the impression that they are about to take to the sky like hot air balloons. The journey into its history is a fascinating and complex experience. The basilica dates to 1094, even though a church already existed on the site, in order to house the relics of Saint Mark which had brought to the city from Constantinople by Venetian merchants. The ruins of this more ancient church are conserved in the crypt of the basilica.
Complimentary work on the byzantine basilica took place in two distinct periods. First, when the Gothic school was beginning to prevail over the original Byzantine style towards the end of the 14th century. Pinnacles, archivolts and window decorations were added to the exterior, while on the inside various chapels and tabernacles were built. Further modifications were made during the Renaissance, when frescoes substituted some parts of the existing Byzantine mosaics. 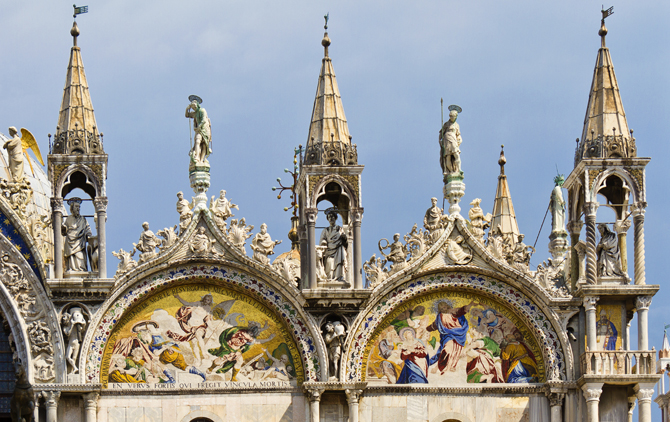 It is these mosaics which make this building so unique, and the visitor can never spend enough time in admiring their detail. Looking up when entering the atrium, or narthex, one can see depictions in mosaic of scenes from Genesis and Exodus, which date to the 13th century. The mosaics on the interior of the church however are much older. Covering a surface of 8000 square metres, they narrate episodes from the Gospels. Their golden colour symbolises divine light. It should be remembered that a little time is needed for the eye to adapt to the suffused light inside the church. “The first impression is that of finding oneself in enormous grotto in the shape of a cross” wrote John Ruskin, “the light enters through star shaped windows which open up at the base of the domes”. The domes are ordered along the axis of the greek cross plan of the Basilica. In the Presbytery Dome at the back of the church, the prophets can be seen with their sacred texts, the virgin and Christ Immanuel. In the central dome before the altar, Christ ascending is seated on a rainbow surrounded by stars and angels; in the Dome to the right of the altar we see Saints Leonard, Clement, and Nicolas; while in the Dome on the left scenes of the life of John the Baptist are depicted. The last dome near the exit is dedicated to the Pentecost. In the centre we see the Etimasia (the throne prepared for Christ to be occupied on his return to Earth for the last judgement), the dove of peace and 12 luminous rays touching the heads of the Apostles.
Your visit would not be complete without a visit the crypt, a highly suggestive location where the body of St Mark was conserved centuries, as well as the baptistery containing the tombs of the doge Andrea Dandolo and the architect Jacopo Sansovino, and the 16th century sacristy, embellished by extraordinary Renaissance mosaics. The museum contains many treasures including the four gold plated bronze horses, which were brought from Constantinople to Venice in 1204, and were once situated on the terrace of the Basilica.