The Basilica of San Petronio 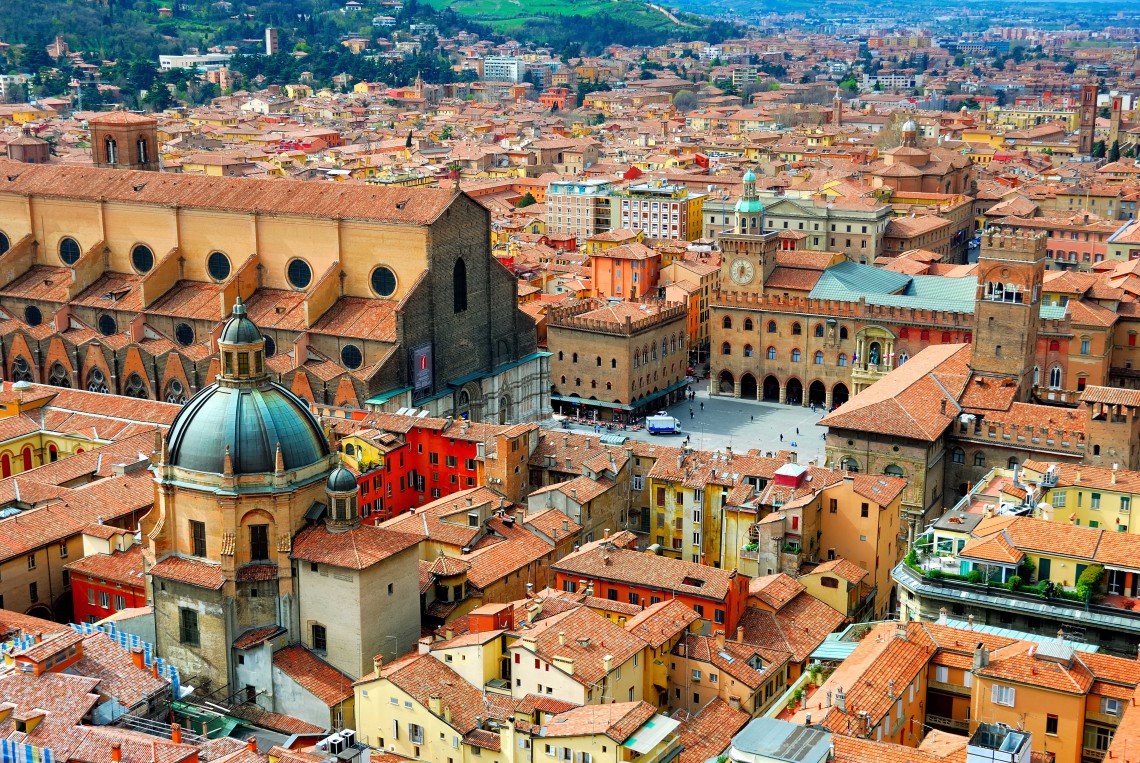 On 20 October 1388 the construction of a civic religious temple dedicated to San Petronio was commissioned by the town’s ruling council. Petronius was the patron saint of Bologna. He had been a Bishop of Roman origins who had done much to restore political and social power and encourage rebuilding following the devastation of the barbarian invasions in the later years of the Roman Empire. He died on 4 October in 450 and his body had been buried in the church of Santo Stefano, while his head was conserved separately in a precious reliquary which is now preserved in the Basilica dedicated to him.
The well-known Bolognese architect Antonio Vincenzi (or di Vincenzo) was commissioned to bring about the construction of this imposing basilica. He was assisted in his work by Andrea da Faenza who helped develop the original project of a Gothic Basilica with transepts. Many existing buildings had to be demolished to make way for this new work. The first stone was laid on 3 June 1390 and up to the death of Vincenzi in 1402 work continued at a steady pace. However, afterwards work was slowed by numerous technical and economic problems, and the increasing political and spiritual uncertainty which were rife in this period, so much so, that the work carried on for another three centuries and is still unfinished today. The original design consisted of a gothic church in the shape of a cross with the main door at its foot and side doors on the two arms. Each doorway was to have its own square and another eight churches were to have been erected around the basilica. Had this original plan being respected today the Basilica of San Petronio would have been the largest in the world. 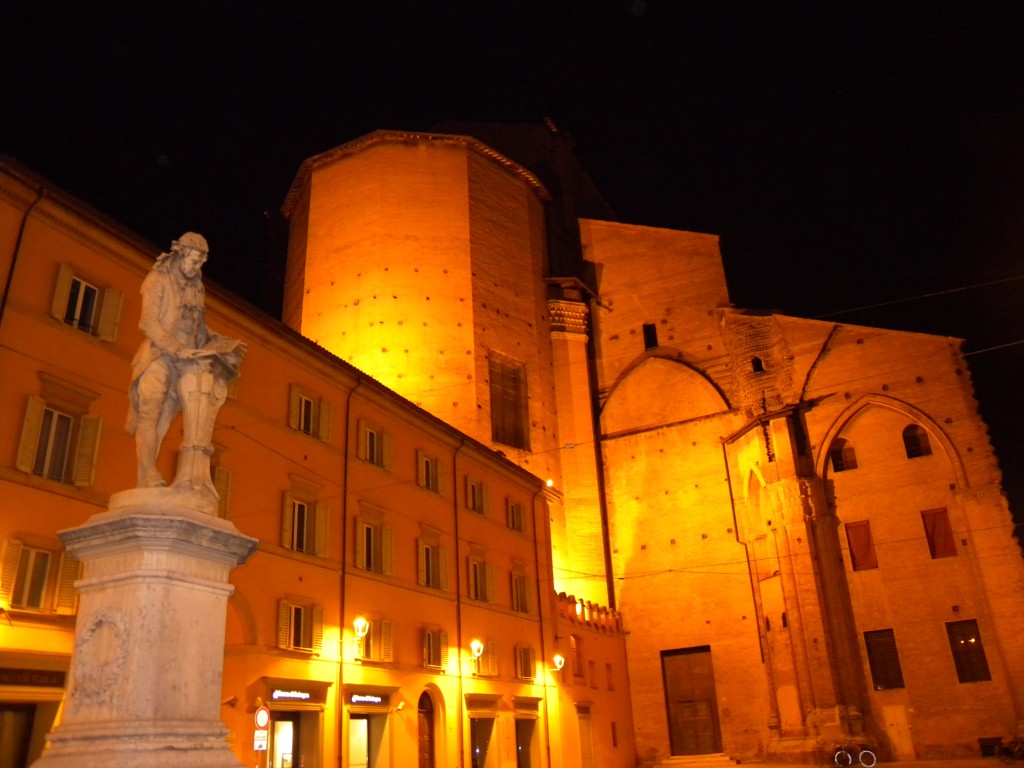 Piazza Galvani e and the Basilica of San Petronio

The first mass was held in 1392 on 4th October, the day dedicated to the saint. In the same year four chapels had been added on each side of the main structure. The bell tower, which is 65 m high, was built between 1481 and 1492.

Between 1647 and 1659 the Basilica took on its current form with the addition of the choir, the presbytery and chapel of St Bernardino on one side and the vestry on the other. In the same years the first pillars were finally constructed to support the vaulted ceiling of the central nave. Girolamo Rainaldi was responsible for the pointed vaults under construction of the semicircular apse. If the plans had been taken to their conclusion there would have been a total of 54 chapels, four bell towers and another four vestries in the corners of the transepts. In the event only the foot of the latin cross was ever constructed.
It would be nearly impossibile to name all of the illustrious artists, architects and engineers who have contributed to the ambitious work over the years. The Tuscan artist Jacapo della Quercia was commissioned to provide the decorations around the central portal, the Porta Magna. Work began in 1425 and was concluded in 1438 the year of the death of the artist. This masterpiece includes 32 statues of patriarchs and prophets with God placed in the centre. There are beautiful low reliefs on the pillars depicting 10 biblical episodes (starting with the creation of the world and concluding with the Flood), and five scenes from the new Testament across the architrave (the main beam crossing the pillers) which carries a statue of the Madonna and Child. 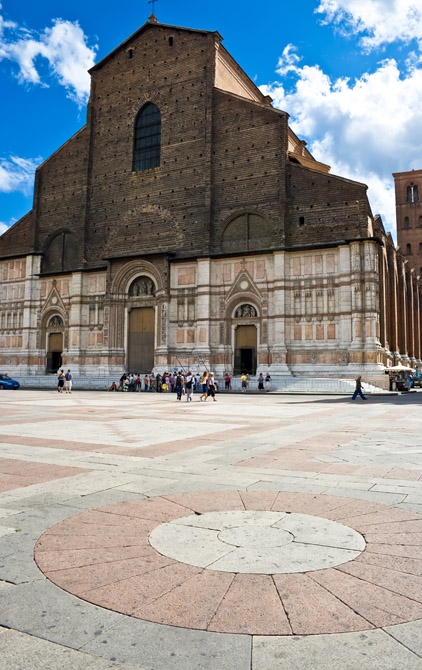 The Basilica of San Petronio

On the right hand door the angels that surround the arch, the sibyls the door frame and the eight scenes from the old Testament are attributed to the Florentine artist Niccolò Tribolo who carried out the work assisted by Seccadenari in 1525. The angels and sibyls on the left hand door are also the work of Tribolo, the scenes from the old Testament are attributed to Alfonso Lombardi apart from one depicting the benediction given by Isaac to Jacob which is by an unknown artist but in a stlye which is close to that of Michelangelo.

At first sight the interior can seem rather sober but in reality the Basilica contains much rich marble, splendid stained-glass windows and wonderful frescoes. In 1655 a sundial in the form of the Meridian line was laid in the paved floor. It was designed by the famous astronomer Giovanni Domenico Cassini and is the longest sundial in the world. The days, months and seasons are indicated by a ray of light which enters through a small hole in the vaulting above. There are also two antique clocks which arouse the curiosity of both tourists and the faithful. Each clock has three hands demonstrating a system for the division of time which is no longer in use today.

Of all the side chapels, the most beautiful and most important is the second on the left where behind the splendid iron and bronze gateway the visitor can see the silver reliquary containing the head of Saint Petronius.

Another chapel that attracts a large number of tourists is the frescoed Bolognini Chapel. The decorations are the oldest in the Basilica and were commissioned by a family of rich silk merchants, the Bolognini. They were painted by Giovanni da Modena. The left-hand wall depicts heaven and hell whereas the right-hand wall shows the journey of the Magi. The fresco of Hell has recently proved to be controversial. As well as showing enchanters, heretics and schismatics and a huge of figure of Lucifer consuming sinners, its also includes an image of Mohammed, depicted as a naked old man in chains, tortured by a daemon which can clearly be seen. Some find this image offensive and two attempts to destroy the image have been foiled by the police.
The Basilica was also the setting for the coronation of Emperor Charles V on 24 February 1530 and also for the 1547 session of the Council of Trent. Today the Basilica of San Petronio is the fifth largest church in the world. It is 132 m long, 60m wide and 44 m high. It was owned by the city of Bologna until its ownership was transferred to the diocese in 1929 following the signing of the Lateran Pacts which ended numerous areas of contention between the Italian state and the Roman catholic church.