The Basilica of San Vitale in Ravenna 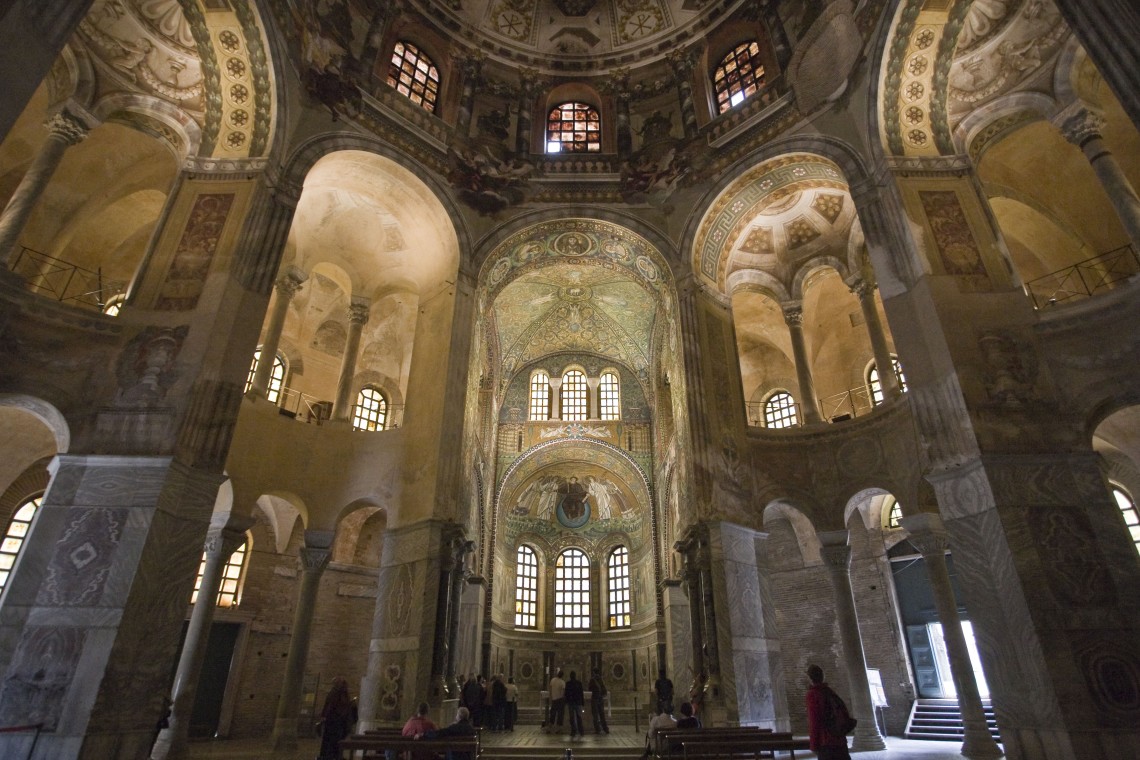 The Basilica of San Vitale in Ravenna bears witness to the power and influence of the Byzantine Empire in Western Europe. Taking the Church of Saints Sergius and Bacchus in Constantinople as its model, work on the Basilica began under Archbishop Ecclesius in 525, the year before the death of King Theodoric and was continued with money donated by Giulius Argentarius, a wealthy banker who supported Byzantine influence in Italy. The church, dedicated to Saint Vitalis, an early Christian martyr, was completed in 547 and consecrated by Archbishop Maximian on 19 April in the year 548. This church contains elements of all of the latest trends in ecclesiastical architecture of that time. It has an octagonal structure like a martyrium (an octagonal structure erected in memory of a martyr), and is big enough to cater for a large number of worshippers. The octagon has colonnades on two levels with niches, which are open on the sides, with triple archways dividing each niche. 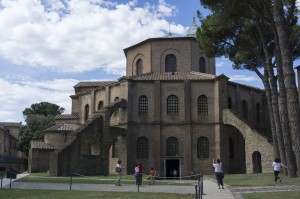 The apse is extremely deep with two side chapels, while opposite, at the entrance we find the narthex and two round towers. Although inspired by Constantinople, the Basilica also contains traces of Western influence in the external brick work, its symmetry and pattern. However, on the inside the church is completely Byzantine. The undulating arches, the design of the ornaments on the capitals and the mysterious reflection of the mosaics on the ceiling of the apse and the presbytery. In order to understand the narrative of the mosaics, a fair amount of knowledge of Christian symbolism is needed.

The concept of mystical sacrifice occupies a central place in the iconography of the mosaics in the Basilica. A universal theme of sacrifice cuts across diverse historical periods. The archetype of this sacrifice is the “Agnus Dei”, the Lamb of God, whose image occupies the centre of the vault over the apse directly above the alabaster altar. The disc with the lamb has a blue background and is carried by four angels dressed in white representing the four corners of the earth. The angels are surrounded by the flora and fauna of paradise: birds, fish and flowers. On a symbolic level the sacrifice of Christ on the cross is combined with models from the old Testament seen in the lunettes above the triforia. They include the Sacrifice of Issac, the Hospitality of Abraham, the Sacrifice of Abel and Abraham and Melchizedek.

Above the lunettes we see pairs of angels holding medallions with crosses like Roman genies carrying the effigies of emperors in triumphs, and at their side there are the prophets Issiah and Jeremiah, symbolically connected to the images of sacrifice shown in the lunettes. There are also three representations of the prophet Moses. In the first, he is accepting the law, in the second guarding sheep and immediately afterwards he stands by the Burning Bush, anticipating Christ in the New Testament. Above these prophets you will see the four evangelists. The vault of the triumphal arch at the entrance of the apse is decorated with busts of the Apostles facing the image of Christ, which symbolically supports the central stone of the arch. 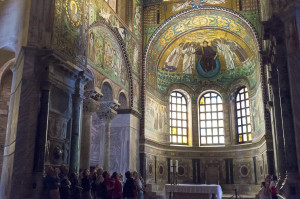 The smaller triumphal arch above the altar depicts two angels who are holding a disc and we can also see representations of the cities of Bethlehem and Jerusalem. The conch of the apse contains an image of the young and beautiful Christ Emmanuel sitting on a blue sphere, while at his feet we see the four rivers of paradise. On the right, an angel presents Saint Vitalis, who has sacrificed his life for his faith in Christ. On the left another angel indicates St Ecclesius, who can be seen giving a model of the basilica to the celestial king. Lower down on the north and south walls of the apse, facing each other, we can see the emperor Justinian and Empress Theodora surrounded by their courts. 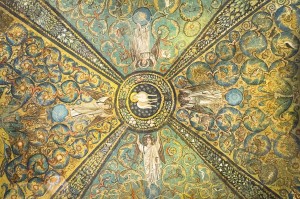 Justinian is shown in all his Imperial Majesty with a purple cloak and a precious crown as he presents a gold paten for the newly consecrated basilica. To the right of the Emperor you can see Archbishop Maximian holding a cross, accompanied by two deacons holding a golden Bible and an incense burner, ready to celebrate the mystery of the Eucharist with the Archbishop. Behind the figure of Maximian, a man with a severe face can be seen. This may be a representation of Giulius Argentarius who provided the funds to build the Basilica. To the left of Justinian we see Count Bellisarius, who had recently reconquered Italy for Byzantium, along with a young patrician and some soldiers of the emperor’s personal guard holding a shield depicting a golden chrism, the monogram of Christ.

These images are designed to show the power of the Byzantine Empire, entrenched by the alliance between church and state. On the facing wall we see the Empress Theodora. She too is wearing a purple cloak and a heavy diadem decorated with pearls. 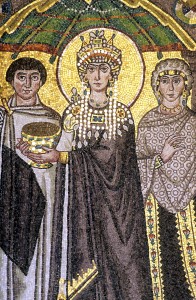 At the base of her cloak there is an embroided image of the Three Kings taking their gifts to the baby Christ, while she is seen offering the chalice for the Eucharist as a gift for the Basilica. Semantically the images of the three Kings connect us directly to the image of the Emperor and Empress, who in their turn look towards the Christ Pantocrator. To the right of Theodora you can see her best friend and First Lady of the Court, Antonina, wife of Bellisarius, with her beautiful young daughter. The other images show little individualism but some critics believe that the white shawls and white handkerchiefs are symbols of deaconesses, women who had a role in the cathedral of Santa Sophia in Constantinople. To the left of the Empress there are two eunuchs who prepare the way for this small cortege as it moves from the narthex to the gallery reserved for women.

The images of the historic characters were made during their lifetimes and it is believed that the faces of Justinian and Theodora were copied from official imperial portraits and sent especially from the capital for the occasion. The style of the mosaics in the Basilica is quite unique. The subjects are totally diverse and there is no trace of the pomposity of more ancient mosaics. Here everything is geometrical, well ordered and rational. These mosaics are pure formulas of faith, their colours are concentrated as if they were precious stones, like the verse in Revelation “and the foundations of wall of the city were garnished with all manner of precious stones. The first foundation was jasper; the second, sapphire; the third a chalcedony; the fourth an emerald” (Revelation 21:19).