The cathedral of Faenza: an imposing Renaissance cathedral 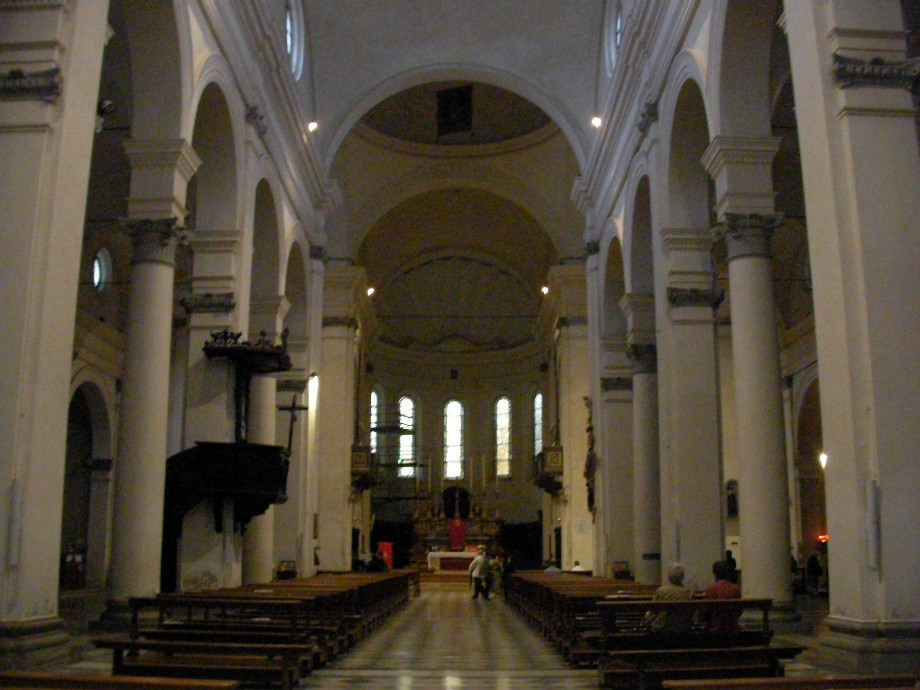 Arriving in Faenza in Piazza della Liberta  , just off Piazza del Popolo, you will find the imposing renaissance cathedral at the top of tall  flight of  steps. It is the seat of the diocese of Faenza-Modigliana  as well as being one of the symbols of the city. Work began on the cathedral in 1474 and lasted for many years. It was commissioned by the Manfredi family, the unrivalled rulers of the city in that period. As well as defending the city from  its many enemies, they were also great patrons of the arts and culture. The Manfredi were “Guelfi” –  supporters of the Pope – as opposed to “Ghibellini”  who fought with the Holy Roman emperor  in one of the major power struggles of that time.

The building, dedicated to St Peter the apostle, was consecrated in 1581 with the façade still unfinished and the rule of the Manfredi a mere memory.  You will notice the protruding bricks,  positioned in such a way as to support the sheets of marble which would have  covered the façade had it ever been completed. However the people of Faenza have got used to this unfinished state and show great affection for their cathedral the way it is.

It was recently necessary to carry out work on the roof in order to protect the works of art contained within the cathedral. Of particular importance is the fresco from the 1400s depicting the Madonna seizing broken arrows in order to defend herself against dangers and to free herself from sins. This is the  Sacred Virgin of Grace who supposedly interceded in order to prevent the plague from reaching  Faenza.  The nave and two aisles  contain numerous Renaissance sculptures,  marble tombs with the remains of Saints and a beautiful wooden choir from 1517 behind the high altar. 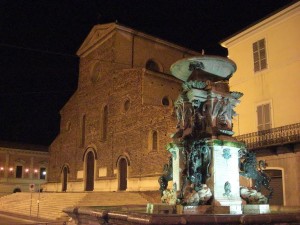 Another interesting feature is the marble flooring of the cathedral. It contains many fossils of ammonites, spiral shells dating from 100 million years ago. In the Middle Ages it was believed that these ammonites were ancient serpents and the marbles that contains them were in high demand and were admired by pilgrims and churchgoers.

Next to the cathedral you will find the splendid 17th-century Fountain which was designed by Domenico Paganelli. Rampant lions and bronze dragons distribute the water which then, just as now, was an extremely precious  substance.

The soft floodlighting of the piazza in the evening offers a spectacle of harmony and highlights the sequence of the architectonic elements,  part in shadow, part lit-up, helping us to understand the qualities of the square and the intelligent use the people of Faenza have made of these spaces. Certainly something to remember and to recount to others.