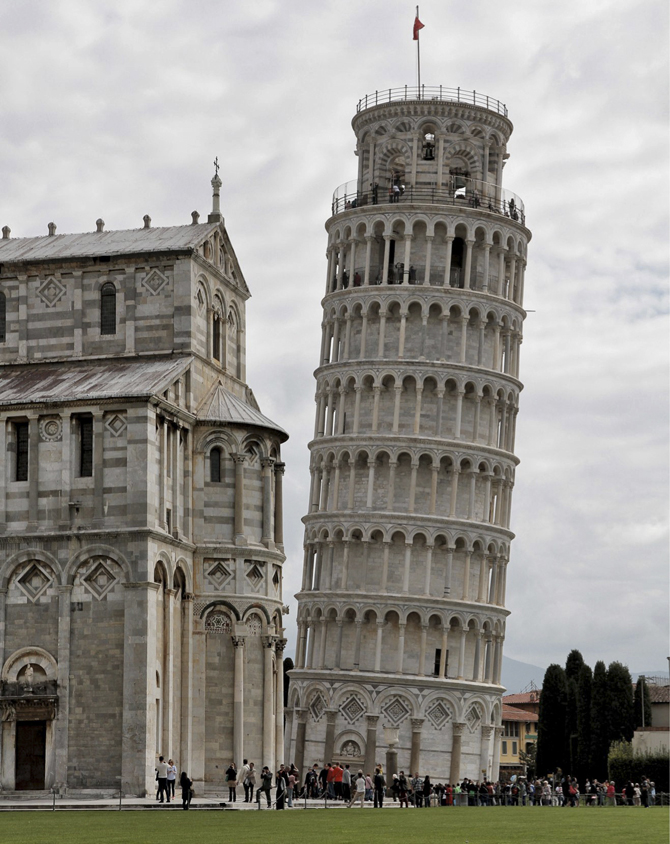 It was suggested that the leaning Tower be included in the list of the modern marvels of the world. The fact that the tower was not actually included in the list it does not diminish its worldwide fame and the miracle of the leaning vertical axis of 4° to the south.
Some historians have claimed that the leaning effect was actually part of the original architectural project. We can assure you that this is absolutely not true. The problem originates from the consistency of the terrain in the area where the tower was built. The soil under the southern part was far softer which resulted in the tower tilting. This bell tower is 56 m high making it just a little bit taller than the cathedral. Building began in 1173 but we are unsure of the identity of the architect. 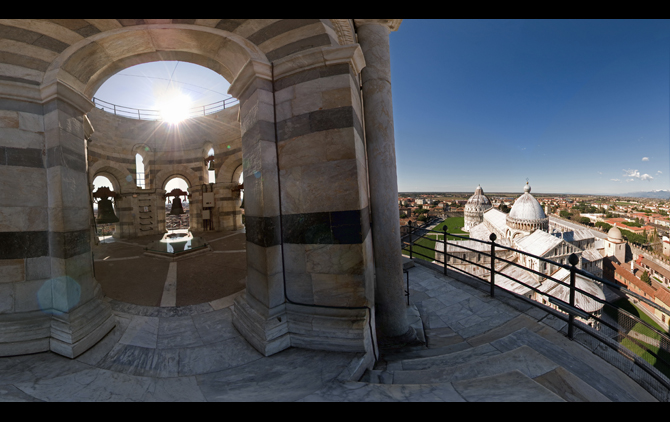 Many believe that the tower was designed buy Diotisalvi who was responsible for the baptistery, but in his famous book the Lives of the Artists , Georgio Vasari claims that the architect was Bonanno Pisano.  The base of the tower is a classic example of Pisan architecture: a blind arcade divided by columns, decorated with geometrical shapes and small roses which is similar to the base level of the Baptistery and the Cathedral. In the first phase of construction two and a half floors were erected. Building continued under the guidance of the architects Giovanni di Simone and Giovanni Pisano after a long interruption caused by the fact that the tower had begun to tilt.

Three more levels were added and it was hoped that this would rebalance the tilting effect. Work was only completed in the next century and the finished tower has eight levels (the base, six floors and the belfry). The levels above the base have a Romanesque loggia with slim elegant columns. The belfry is in a gothic style. It has a pointed arched window and is decorated with a series of small blind arches.
The belfry houses seven bells, each ringing a note of the musical major scale. The first is called Pasquareccia (G-flat) and was cast in 1262 by Master Lotteringio di Bartolomeo. The second is called Terza, (B-sharp), and is the work of craftsmen coming from Lorraine and Alsace in 1473. The smallest bell is called Vespruccio (E). It was made in the 14th century but was recast into its present shape in 1501. 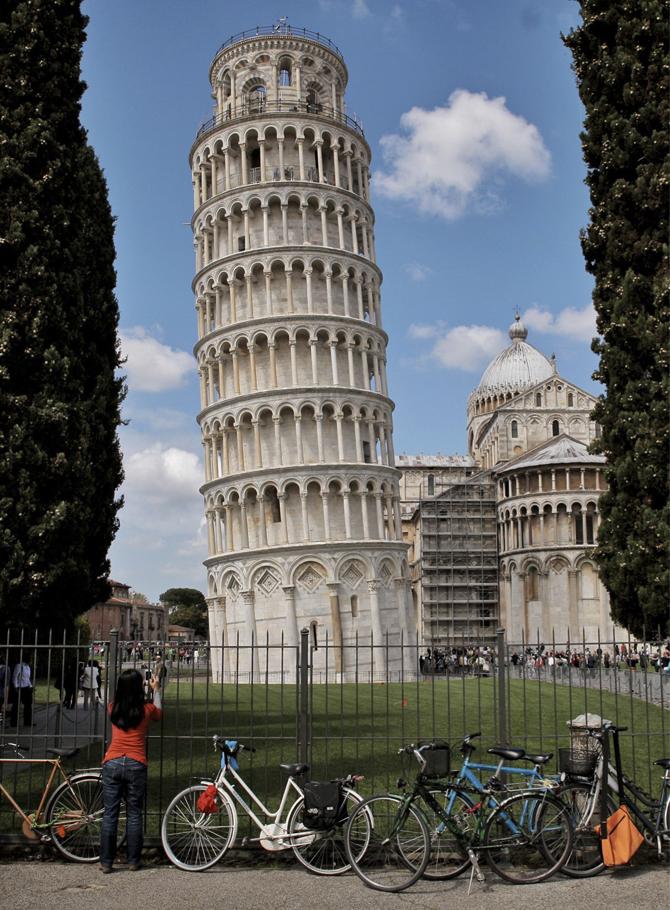 Crocifisso (C-sharp) was cast in 1572 by Master Vincenzo Possenti and recast in 1818 by Gualandi da Prato. Dal Pozzo was made in 1606 but was damaged during the Second World War and after its restoration it was placed in the Cathedral Museum with a copy taking its place in the tower. The largest bell is called Assunta (B) and was cast in 1654 by Giovanni Pietro Orlandi. The last bell, San Ranieri, (C- sharp), has been recast many times, the last by Pierfrancesco Berti di Lucca in 1735.
Nowadays the bells are rung on a daily basis using electronic equipment and you can hear them at midday and before mass. In the past each bell was rung at different moments of the liturgy, Pasquareccia was rung before Easter, Terza in the third hour of the liturgical day (nine o’clock in the morning) while Vespruccio at vespers (seven o’clock in the evening). It is also claimed that the great Galileo carried out his experiments from the tower.