The Mausoleum of Galla Placidia in Ravenna Built in the shape of a Greek cross and crowned by a low tower, this small cube-shaped chapel of the imperial court, dedicated to St Lawrence, the celestial patron of the family of Theodosius the Great, was one of the first buildings of the new Christian cult. It was built in Ravenna in the third decade of the fifth century A.D. on the orders of Galla Placidia, Roman Empress, daughter of the Emperor Theodosius I and wife of the Emperor Constantius III. Originally the building was intended to be part of the complex of the Basilica of Santa Croce (the Holy Cross) and the form of the cross was the key architectonic solution for this small temple and the dominant theme in its interior decoration. It would be repeated four times in the plan of the chapel and in the composition of the mosaics. Cross-shaped burial buildings were already common in pagan times but it was with the arrival of Christianity that the cross took on its meaning as a symbol of salvation. Inside the chapel ancient art meets the mediaeval. Symbolic language is born here, directly in front of our eyes. The central compositions are “The Good Shepherd” and “the Martyrdom of St Lawrence”, placed one in front of the other in the lower lunettes of the southern and northern walls. The scene of the Good Shepherd shows us the flowering garden of paradise. In the centre we see Christ Emanuel, a beautiful young man, dressed in patrician’s clothes, seated and leaning against a golden cross. The Good Shepherd reaches out to touch the nose of one of the six candid sheep, representing the souls of the righteous, resting in a paradisiacal setting. 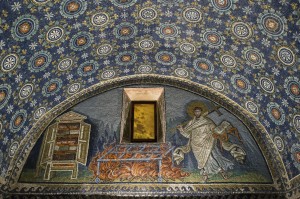 “The New Heaven” and “the New Earth” are represented in mosaics, made from small pieces of coloured glazed glass in hues of blue, pink, green and gold, which make the light flow from their base around the whole chapel. It might seem that the whole decoration of the Mausoleum of Galla Placidia in Ravenna was inspired by the verses of the sixth century poet Venanzio Fortunato “O light that is born here, O light captured here reign freely”. The images of paradise seem to dissolve in this light. Opposite we see the cross in the hand of St Lawrence who is walking towards his painful martyrdom. This should remind us that the journey towards the celestial kingdom often entails passing through pain and suffering, and that our own death and resurrection repeat that of Christ. The concept of man’s freedom of choice is explained here using a new spiritual language which will be taken up by artists in the Middle Ages. The rigorous symmetry of the composition, the linear rhythm, the beginning of the use of reversed perspective (seen in the grid in the middle of the scene and the open book case containing the four Gospels) give testimony to the birth of a new art form with a strong eastern influence, especially from Syria. The dome which covers the chapel is decorated with a golden cross in a blue sky surrounded by concentric circles of stars which symbolise victory over death. The vaults of the dome are decorated with the symbolic images of the four evangelists while the arches of the side niches are decorated with floral designs recalling the gardens of paradise. In the eastern and western lunettes we can see deer drinking water from the Fountain of Faith. In the second row of lunettes eight Apostles are arranged in couples. Their hand gestures draw our eyes towards the eastern part of the mausoleum where we find the first apostles Peter and Paul. They in turn point upward towards heaven and the celestial kingdom. The apostles are the visible incarnation of the earthly Church through which they receive the grace of the celestial Church at the ideal meeting point, the cross of the crucifixion. The dark blue background of the higher vaults with the golden stars symbolising the eternity and strength of the Kingdom of Heaven contrast with the more fluctuating images of the lower levels. For the first time we also see one of the principal techniques of representation in Byzantine art: the increase in the size of the figures from bottom to top in respect to the view of the Observer. The base of the wall of the chapel is decorated with yellowish marble. In the eastern, western and southern niches there are three marble sarcophagi. However, according to historians, none of them have ever contained the body of the august and powerful Galla Placidia.