The most important squares of Padua and Palazzo della Ragione 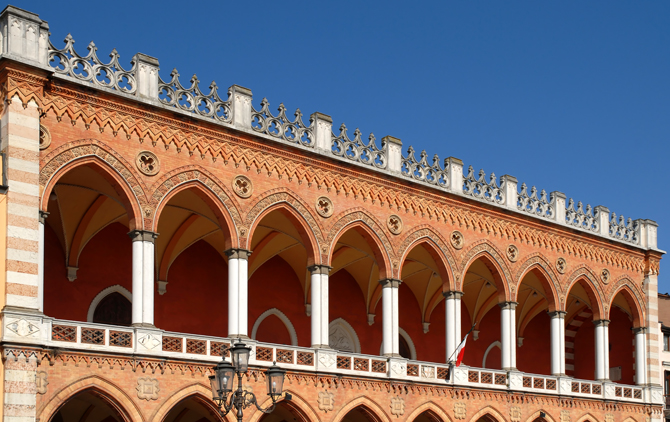 The heart of Padua lies in its squares. There are three, situated one next to the other with Palazzo della Ragione situated in the middle. Let’s start with Piazza delle Erbe (erbe:vegetables, herbs) which in ancient times was called Piazza delle Biade and later del Vino in reference to the type of market that was held there. Still today, every morning from Monday to Friday and for the whole day on Saturday, one of the most picturesque markets of the city is held here. The square is filled with 70 stalls selling fruit and vegetables while around the Fountain you will find the flower stalls. When this colourful market shuts down for the day the stalls are closed up, and like a type of handcart, they are taken to the various warehouses in the vicinity of the square, most of which are in the adjoining old ghetto. In the evening the square fills up with university students and Padovani who come for an aperitif, a spritz accompanied by a tasty bite to eat and the traditional spuncioni (which today could be defined as a finger food). Piazza della Frutta or dei Frutti can be reached by going under the large archway near the Fountains. The passageway is called Volto della Corda (literally Rope Alley) because it was here that liars, cheats and debtors were punished by having their backs whipped with strips of rope. In the past this square was also called peronio because clogs and boots, which were called perones in Latin, were sold here. The stalls also offered fish and game, eggs, poultry, spit-roasted pork, vegetables and esteemed birds such as hawks. Today the market still offers fruit, vegetables, spices and various cereals. 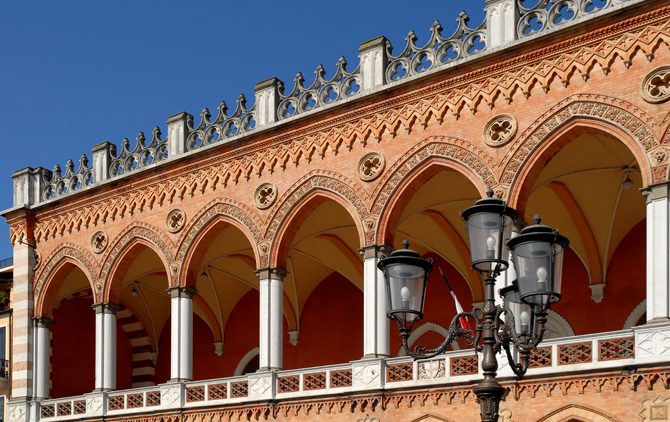 Situated between the two squares we have described so far lies the Palazzo della Ragione, an important symbol of the city. It is often referred to as the Salone (the drawing room) and represents one of the largest covered spaces ever created by Italian architecture. The immense room on the upper floor represents a prodigious architectonic achievement, while the spaces on the ground floor were occupied by what could be called the first “shopping mall” in history. The exact date of construction is unknown but in 1166 the lower part of the building already existed. At that time it housed tribunals and financial offices, a role it maintained during the whole period of Venetian domination until 1797 when the offices were transferred and the Salone was opened up to large popular meetings and celebrations. A friar Giovanni degli Eremitani is responsible for the Palazzo we see today with its upper structure (1306-1309). It was badly damaged by a fire in 1420 and the original frecoes by Giotto were destroyed. The building was immediately rebuilt and the three original rooms were joined to make a single enormous hall by the architect Bartolomeo Rizzo, an expert in marine engineering. 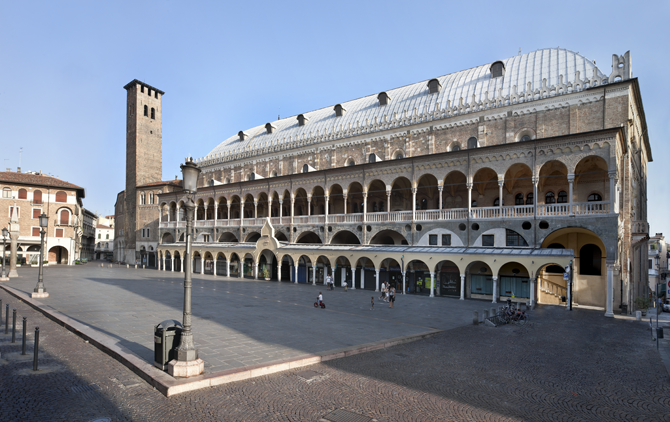 In fact the roof recalls the hull of an upturned boat. The hall is 80 m long and 27 m wide and it is covered by a wooden structure which is nearly 40 m high. It is decorated with 500 frescoes depicting astrological and religious themes. Many of them depict images associated with Venice- the Serenissima. A lower tier features animal figures under which judges and notaries would be seated when judging court cases. In fact those who were to be tried would receive a card depicting an animal symbol indicating the position of the judge who was assigned to the case. In this way illiterate people could easily find their judge simply by looking for the corresponding animal. The room also contains a 19th-century wooden horse which was donated to the town by the Capodilista family and numerous clocks and instruments for measuring time. One curiosity: on the floor of the hall you will notice a black and white strip. This indicates the 12th meridian which passes through Padua. On the ground floor, below the hall, there are still many shops selling delicious food, ranging from cheese, cured meats, meat and fish- all signs of an ancient Paduan tradition. 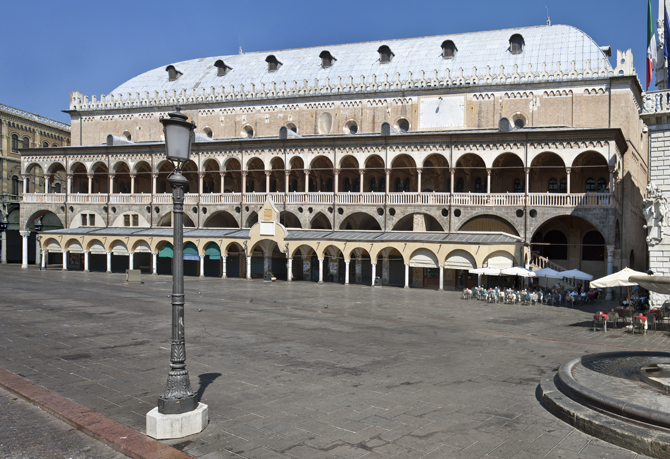 If you carry on from Piazza della Frutta going towards the left, leaving the Salone behind you, you will come to Piazza dei Signori. Its name derives from the fact that in the past the palace of the ruling family of Padua in the 14th century, the Carraresi was situated here. The square is characterised by the facades of its houses with porticoes and terraces decorated with wrought iron balconies. It contains the church of San Clemente, the Palazzo del Capitanio (the Captains Palace), the Torre dell’Orologio (clock tower) whose portico will lead you to the piazza Capitaniato, the site of the Carraresi’s castle, now occupied by palazzo Liviano seat of the Faculty of Letters and Philosophy. On the southern side of the square you will see the elegant 14th century Loggia della Gran Guardia where meetings of the town’s council were once held.