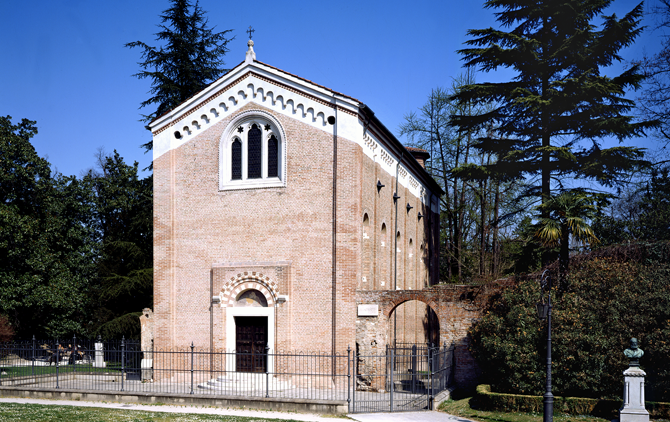 In the gardens of the Roman arena, or rather what remains of the arena, built around 60-70 AD, and only a little smaller than Verona’s, you will find the Scrovegni Chapel with its 14th century frescoes by Giotto. The name of the architect of the chapel is unknown, but the architecture pales into insignificance when we consider the splendour of the frescoes. To decorate the building Enrico Scrovegni commissioned Giovanni Pisano to provide three marble statues for the altar and Giotto to carry out the pictorial decoration. Giotto was already a well-known artist. He had worked for the Pope on the Basilica of St Francis in Assisi, in San Giovanni in Laterano in Rome, in Padua in the Basilica of St Antonio and the Palazzo della Ragione. The Florentine artist painted the Story of the Virgin and Christ in 37 scenes. 16 on the right-hand wall in three tiers, 18 on the left-hand wall also in three tiers; and four on the archway in two tiers. On the lateral walls at a lower level Vices and Virtues are represented. On the counter-facade above the main entrance you will see the universal judgement depicting the Elect on the right, and the wicked on the left with a centrally placed Lucifer chewing the damned with three mouths. Above, God the Father is surrounded by apostles, patriarchs, angels and archangels and in the centre, a portrait of Scrovegni offering Christ in Majesty a model of the small chapel, offered as a penance for the soul of his father Reginald who had been accused of usuary, a fact which Dante mentions in the 17th Canto of Inferno. In the past the wooden crucifix painted by Giotto was hung in the Presbytery but nowadays it can be found in the Eremitani Museum. The ceiling which is completely blue presents images of Christ among the evangelists and prophets.
These frescoes represent Giotto’s greatest achievement and one of the masterpieces of Western civilisation, the only comparable work being Michelangelo’s Sistine Chapel in Rome. With this work Giotto inaugurated a new era in the history of art, moving far beyond the Byzantine abstraction which was still dominant in this period. His human figures are so much more natural and realistic that he is defined as the first modern painter.