Venice and its Mysteries 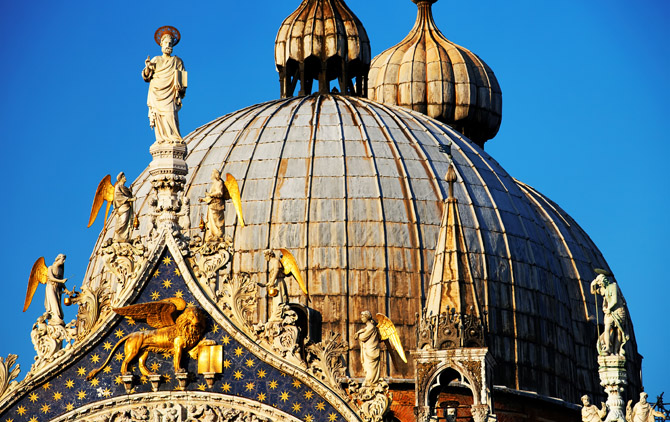 A city crisscrossed by magical impressions and amazing history

Looking at the Grand Canal from above, it seems as if it has the shape of a serpent, symbolically connected not only to sin but also to awareness, or even that of a dragon, the mask of the unknown which Jung called ‘shadow’, whose head is the island of San Giorgio.
The scene it brings to mind is that of a painting by Vittore Carpaccio which can be found in the Scuola di San Giorgio degli Schiavoni, also known as the Dalmatian School of St. George and Tryphon, in the Castello District in Venice: St George is seated on his horse, facing the dragon, with his long lance piercing the dragon’s head. There are mutilated bodies and skulls on the ground. In the background, which creates a backdrop for a princess who is praying, there are rolling hills and an idyllic city in front of which is a bay. 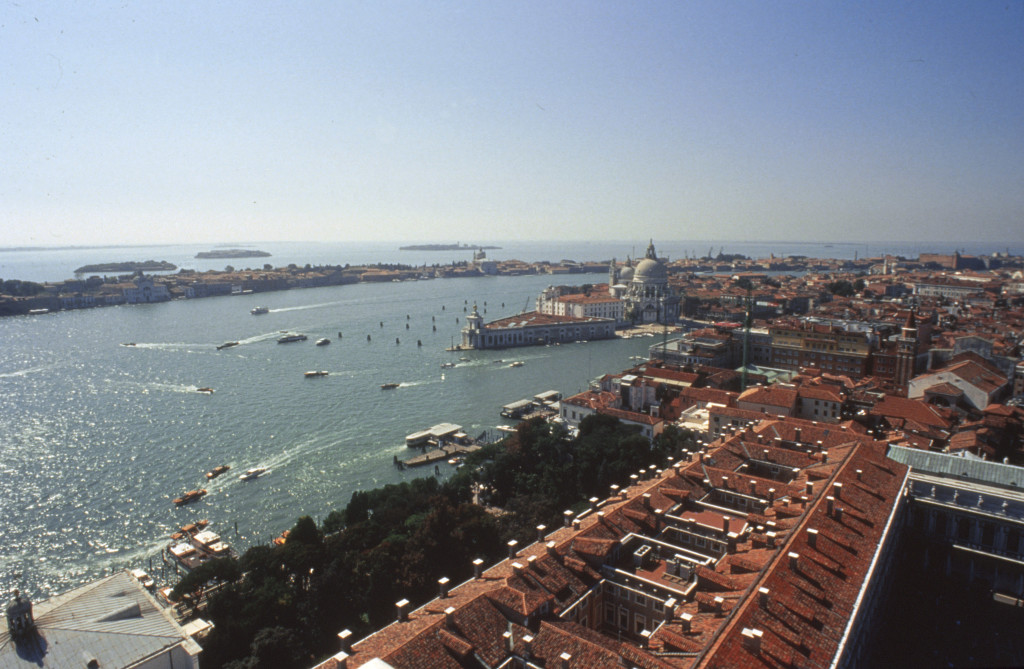 For the observant tourist, Venice opens up an infinite number of mysterious and hidden pages to leaf through. Together with its beauty, which is such that no one wants to leave it, the city also envelops its guests with its ghosts, its night time murmurs of troubled souls and its architecture which is closer to the underworld than that of the Champs Elysee. Take for example, Palazzo Dario, which was the subject for a painting by Monet when he was residing in Venice. It is situated not far from the Peggy Guggenheim Collection, on the small square of Campiello Barbaro. The façade is renaissance style and is slightly inclined to the left. In between its ornamental decoration, little holes can be seen which appear to be damage caused by shots. Giovanni Dario built the house in 1487.
Not long after, he lost all his possessions, and his daughter died of a broken heart. Giacomo Barbaro, who lived there in the 1600’s, was murdered in Candia. Rawdon Brown, an English scientist, bought it in 1832 and committed suicide ten years later. Other unfortunate owners were Charles Briggs who was forced to leave Venice after being accused of being a homosexual; Henry De Reigner who fell gravely ill; Arbit Ardoll, a rich Armenian merchant, who ended up in poverty; Count Filippo Giordano delle Lanze who in the 70’s was killed by his lover who cracked open his skull with a statue; Christopher Kit Lambert, manager of the group ‘The Who’, died mysteriously in London in 1981; the industrialist, Raul Gardini committed suicide following enquiries in the 90’s into a scandal concerning kickbacks. 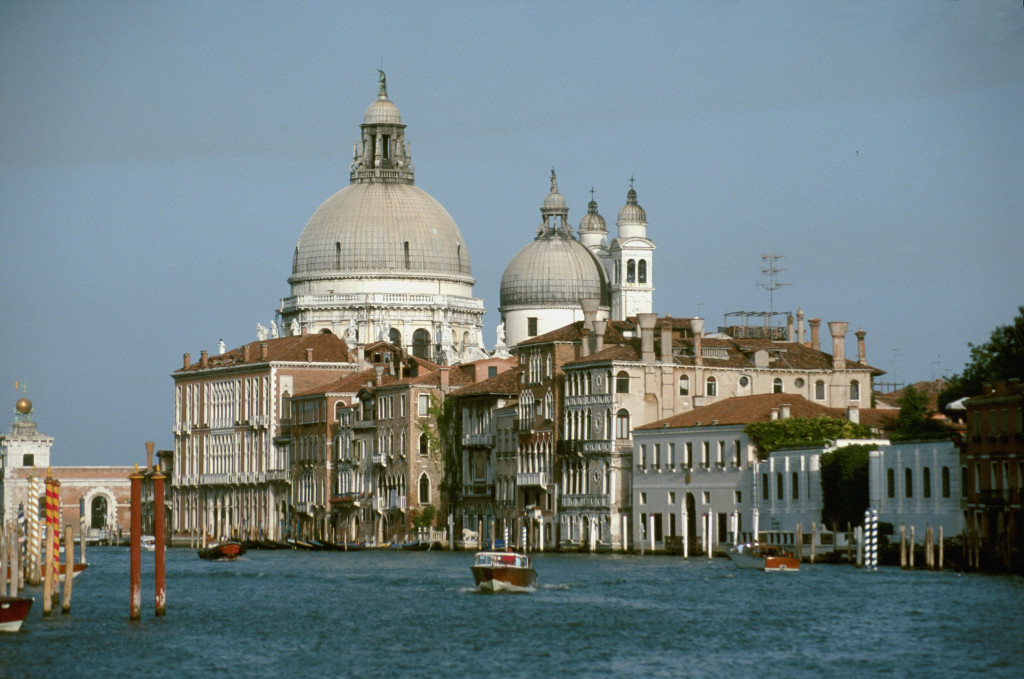 The tenor, Mario del Monaco, managed to avoid the curse of Ca’ Dario in that on his return from negotiating the purchase of the house, he had a serious accident and had to give up his offer. There is an inscription on the façade of the house which signals its destiny, ‘Urbis Genio Ioannes Darius’ which translates as ‘Giovanni Dario, to the genius of the town’. However, as an anagram it becomes, “Sub ruina insidiosa genero”, whch is ‘treacherous son who ruins those who live in it’.
Just a few steps further on, one finds another enigma that of the Basilica di Santa Maria della Salute. It was built in 1631 officially to fight off the plague but esoteric undertakings cannot be excluded. The architect, Baldassare Longhena of Jewish origin and well-versed in the Kabbalah, had it built on an octagonal plan, but when he presented the project to his clients, he gave them false measurements. In fact, the inside of the building is constructed on the base of two numbers, eight and eleven. The first is among those preferred by Christians as it signifies the infinite and eternal life. The significance of the second, however, is ambiguous. On the one hand, it symbolizes transgression from the Ten Commandments, on the other, in the Kabbalah, it symbolizes God and the 10 attributes/emanations, known as Sephirot. All the measurements in the Basilica are multiples of these two numbers. It is the esoteric crossroads between Christianity and Judaism which gives this place an extraordinary energy. As to Kabbalah, in Italian Cabala, behind the Basilica there is a small street called Ca’ Bala’: Ca’ in Venetian means ‘house ‘ and it is usually used in connection ‘the house of’ plus a family name. However, in Venice there has never been a family with the name ‘Balà’.
From the steps of this Basilica, one can see San Marco and two columns in the square, a scene immortalized in the beautiful paintings of Canaletto and Guardi. This is the place where, for centuries, those who had been condemned to death were executed. The last was a certain Domenico Storti who was hanged in 1752 for killing his brother. People say that there should have been three columns, but the one which had the statue of a crocodile on the top of it, fell into the waters of the dock as it was being unloaded. On foggy days, it seems that the ferocious animal appears among the waves and when that happens a young virgin disappears. 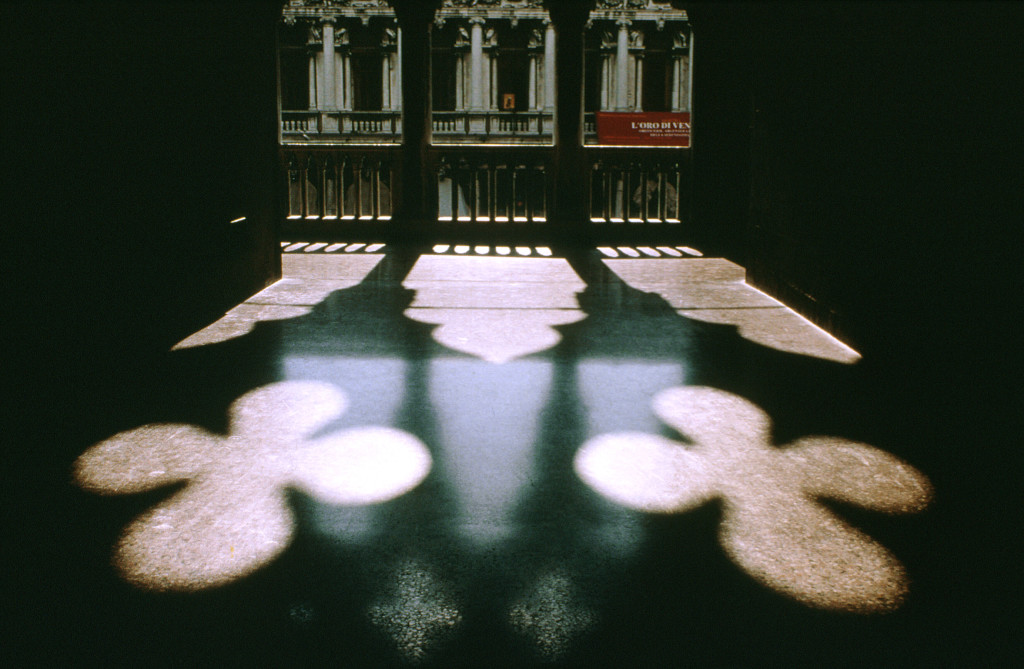 A little further on, at the entrance of the Basilica of San Marco, there is a powerful alchemic design which often goes unnoticed. It is a star-shaped, dodecahedron mosaic in which are depicted the seven planets, the four elements, the squaring of the circle, the alchemy flower the birthplace of the philosophers’ child. It is more than likely that in 1778 Giacomo Casanova, more renowned for his amorous adventures than his interest in alchemy, and Count Cagliostro met to speak about their magic formulae. There is also another strange mosaic inside the Basilica in front of St Isidoro’s chapel depicting a rhinoceros. In the XIII century, when this mosaic was created, rhinoceroses were unknown. The first one came to Europe in 1515 donated by the Sultan of Cambay to the King of Portugal of which Albrecht Durer made a splendid engraving. In Venice, however, the connection between the image and reality is not important, but rather what it signifies. In the case of the rhinoceros, the horn represents strength and the tree next to its shoulder the value of knowledge. However, who created that mosaic and when remain questions without an answer.
Coming out from San Marco and going towards the Rialto Bridge, one comes across a hunchback. Although less famous than that of Notre Dame, it is no less disturbing – the hunchback of the Rialto in Campo San Giacometti. Some say that it represents a thief who really existed and who was condemned to hold up a marble staircase until he died. The statue used to be kissed by thieves who were condemned to run naked between two lines of people who beat them all the way from San Marco to the Rialto. Arriving at the hunchback, the thieves kissed it in relief as their punishment was over. For others, it is a man kneeling down, holding the ladder that allowed preachers to read their notices. It could also be the image of a man crushed by the weight of his existence, a renaissance Sisyphus. 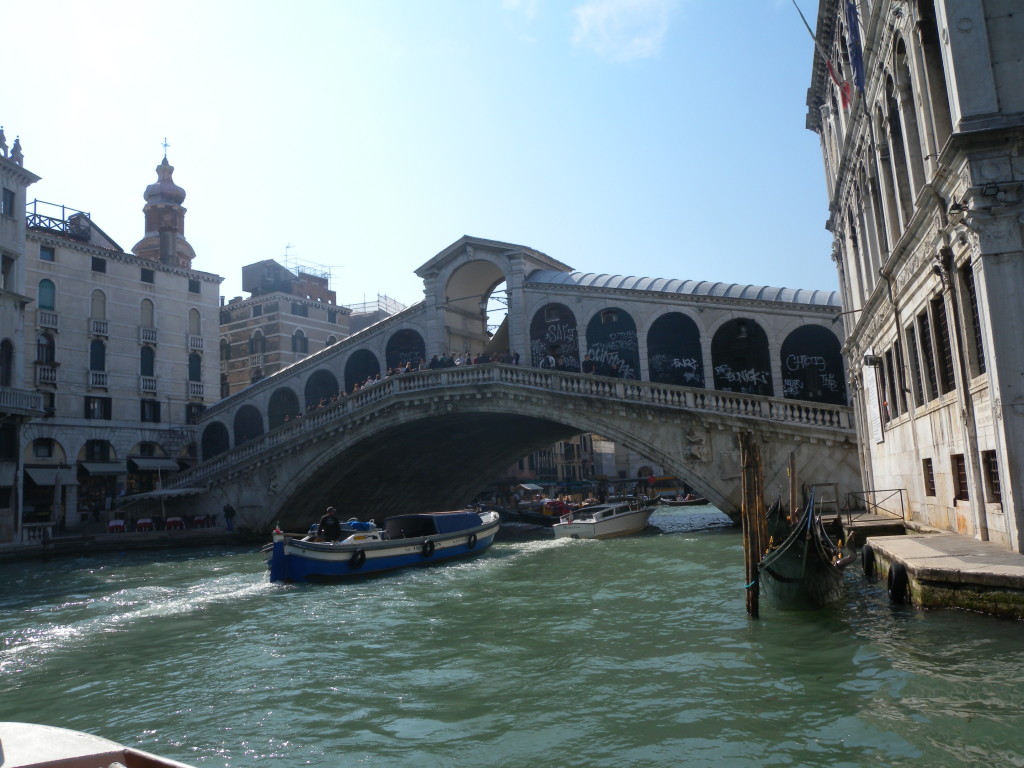 There are many secret and strange stories that an inquisitive tourist in Venice can discover reading Mysteries of Venice and Mysteries of the Lagoon and Tales of Witches byAlberto Toso Fei or Venice is a Fish by Tiziano Scarpa who proposes a game with which we can conclude our mysterious journey: Go back to San Marco to the column on the corner of the Palazzo Ducale. From there, go to the fourth side that faces San Giorgio and you will see that it is not in line with the others. With your back on the column, try to go round it without falling down from the step at the base. When I was a child, I always tried it. It was more than a challenge or a game; it was something that made me shiver. I was told that those who were condemned to death were given this last chance to save themselves there. Whatever the legend, I like this portrayal of death, one which has a depth of a few centimeters rather than the usual abyss.