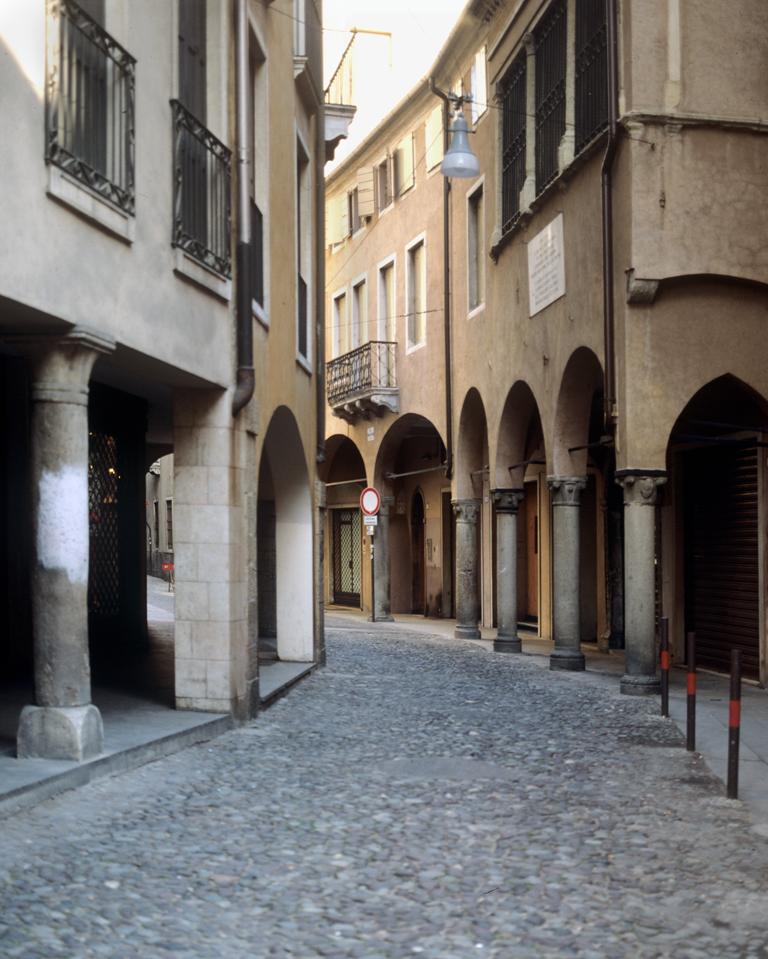 We have no documents that state with any certainty when the Jewish community first established itself in Padua, however we know that in the 13th century numerous families came to live here, attracted by municipal statutes, mercantile activity and Venetian liberal attitudes to Jews. In 1541 in Padua as well as Venice a new practice began in which a special area for the Jewish community was established that would be “stable and separate” and where Christians could neither reside nor work. In 1603 immediately after the Easter celebrations the Jewish families who were resident in Padua went to live in the ghetto. It consisted of a group of large comfortable houses crossed by narrow winding streets and enclosed by four gates. The gates were guarded by a Christian and a Jew and had inscriptions in Latin and Hebrew, and the symbol of the Lion of St Mark. It was not possible to leave the area after two o’clock in the morning. The ghetto was a lively place and in 1615 there were 64 shops frequented by the townsfolk. One of the main activities was the art of “Strazzeria”: the commerce of second-hand objects, however they were also stalls which made loans especially to students and professors. With the arrival of the French in 1797 the Jews were declared to be equal to other citizens and the gates of the ghetto were demolished and the area was renamed as via Libera (freedom street). Some traces of the old boundaries remain and can be seen on the western side of the church of San Canziano and on a wall of a building at the crossroads of via San Martino e Solferino and via Roma, where two Stone inscriptions, one in Latin and the other in Hebrew, remind Jews that they should retire into the ghetto by sunset.The Jewish colony was quite large due to the tolerance of the Venetian Republic and of the University, which in contrast to others in Italy and Europe, had always accepted students of every religion including those of the Jewish faith.
Since Jews could not live in other areas of the town, the houses of the ghetto, are characterised by their diversity, the use of recycled materials, and for their height. Despite the various transformations and rebuilding that has gone on over the years still the ghetto conserves the original romanesque street plan. Of particular interest are the four columns with completely different capitals in via San Martino e Solferino opposite the entrance to via dell’ Arco. Going under the portico you will enter Corte Lenguazza, with a small gallery and the vestiges of the old Synagogue. In the past it represented the heart of social and religious life of the ghetto. Here one could purchase unleavened bread and meat that had been prepared according to the rigid prescriptions of Jewish law. Towards the east inVia delle Piazze the first grand synagogue using the German rite was inaugurated in 1525, however in 1943 it was destroyed by fire. Its restoration was only completed in 1998.
The beauty of the ghetto can be found in its narrow streets and the striking facades of some of the palaces, the height of the houses and small workshops which also spread into the surrounding area after the ghetto was suppressed. You will also find many wine bars and typical venues in this beautiful area.